Some Māori are urging whānau to improve their health by ditching dairy and meat - and embracing veganism. 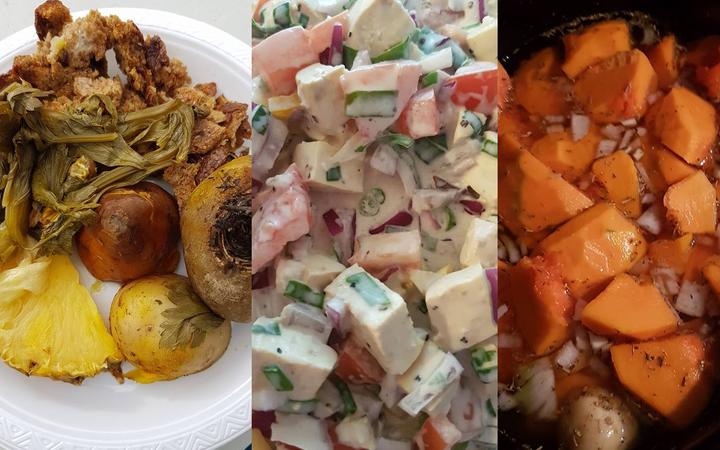 Some of the vegan food showcased on the Vegan Māori Facebook page. Photo: Supplied / Vegan Maori

The topic was at the centre of a recent New Zealand Human-Animal Studies conference, where researchers shared indigenous perspectives on plant-based diets.

Katie Brown, who lives in Lower Hutt, said it was easy to make classic Māori dishes like hāngi or boil-up vegan.

Boil-up - usually made by boiling pork bones in a broth with pūha or watercress - is a household favourite for many whānau.

But Ms Brown's version comes with a twist. She calls it a boil-up soup, a recipe she got from her uncle, which has no meat in it.

She blends together a mix of homemade vegetable stock, boiled kumara, potato, herbs, salt and pepper, and lots of watercress.

Katie has ditched all meat, seafood, and dairy products.

"We found that red meat and processed meat were the two leading causes of bowel cancer, particularly in males," she said.

"When you see someone go through cancer, you feel really helpless to be able to help them.

"But if you know that you can do some things now to prevent you or any of your whānau from going through that then you kind of would. As soon as I had that knowledge I stopped eating red meat."

She said it was easy making the change because she was values-driven, not diet-driven.

"People have really embraced it because when you're eating based on values not based on a diet, as such, it's not like, 'Oh, she's carb-free.'

"It's more about ... trying to do something good for the planet. It's a big life change but it's the best thing I've done."

But health benefits are not the only reasons to turn vegan.

Anne-Marie Midwood-Murray, who runs a Māori vegan Facebook page, wanted to reclaim some of the same eating habits of her tūpuna (ancestors).

"Their diets back them, the majority of it was vegetarian and kaimoana, but mostly vegetarian. Fast-forward to now, we've become lazy with learning about the better practices and stepping back into the times of our tūpuna living their best lives and being healthy."

The New Zealand Vegan Society anticipates the number of vegans in the country has risen significantly in the last five years.

A spokesperson said the amount of traffic its website got, the number of Māori vegan social media pages, and restaurants offering vegan options, had rapidly increased.

"There is this idea that you have to eat meat to be Māori. I had internalised that idea to an extent and so I thought that my vegeterianism and my veganism would alienate me. I guess I was wrong."

But Ms Midwood-Murray said it sometimes took whānau a little bit of convincing to see how easy eating vegan could be.

"Going into the wharekai [kitchen] and having those conversations with our kaimahi [worker] and I remember an aunty saying, 'Oh no no no, I'm never going to be vegan.'