A mass exhumation of 53 tūpuna or ancestors is planned for an urupā or cemetery being washed away by the Wairoa River in Hawke's Bay. 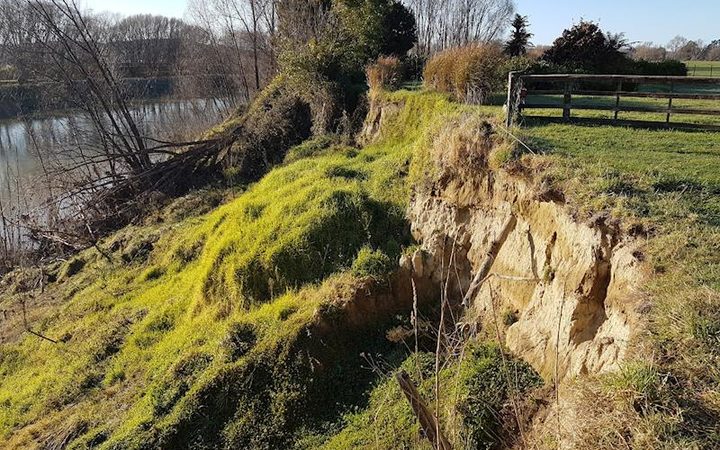 The bank of the Wairoa River near the end of Huramua Road East, where a local urupa is threatened by erosion. Photo: Huramua Marae / Givealittle

A group of whānau whose loved ones are buried at Matiti Urupa, outside of Wairoa, are working together to undertake the massive shift.

Matiti Urupa is in the small community of Huramua, and after World War II, Māori leader Sir Turi Caroll sold around 700 hectares at Huramua to use a training centre for Māori returned servicemen.

Huramua Marae chairman Chaans Tumataroa-Clarke said soldiers came from around the country to live in the farming community.

"Most of our fathers and grandfathers and great grandfathers settled after World War II drawing ballot farms from the rehabilitation scheme they had there for returned Māori soldiers," Mr Tumataroa-Clarke said.

Now Matiti Urupa where Sir Turi Caroll and many soldiers are buried is under threat from the Wairoa River.

A report by the Hawke's Bay Regional Council earlier this year showed the Wairoa River is taking 6m of land every year.

Maria Cairns is part of a project looking to save 53 tūpuna buried at Matiti cemetery - and the nearest grave site is only 10m away from the river's edge.

"We had three options put to us, one was to create a man-made barrier, and the other option was relocate, and the third option was obviously just to leave them there," Ms Cairns said.

The whānau were left with only one option - to relocate their urupā.

With all whānau now onboard with the plan - they will move the urupā to another site near Huramua Marae.

"We wanted to do it together as a hapū so that we're not leaving people to do it on their own in 20 years' time or not leaving it up to our mokopuna."

Mr Tumataroa-Clarke said the whānau had been trying to reach its $90,000 target through fundraising and applying for grants.

They are yet to reach their target, but despite the financial toll he is determined to complete the shift.

"We're going to see it through - we're going to get it done right so that it's appropriate to our... tūpuna that are buried in our urupā," Mr Tumataroa-Clarke said.

Mr Tumataroa Clarke said once the shift was completed, he would like to create a resource to help other whānau facing a similar situation with their urupā.

Hawke's Bay Regional Councillor Fenton Wilson said the council had been working to save the urupā for a number of years.

"We've tried a number of natural remedies - planting and that sort of thing but in the end the awa [river] is telling us she wants to broaden her horizons," Mr Wilson said.

He said the Ministry of Heritage, Ministry of Health, Department of Internal Affairs and Te Puni Kōkiri all attended a recent hui on the urupā shift.

"The challenges that any family has with this sort of stuff is very hard to comprehend - our involvement so far is just giving them some clarity on what we think the river will or won't do going forward."

There are plans to complete the shift in two moves - with the first planned for March next year.