An historic plough which served as a symbol of pacifism at Parihaka - a Māori village of about 2000 people that was violently sacked by the British - is being restored for the first time. 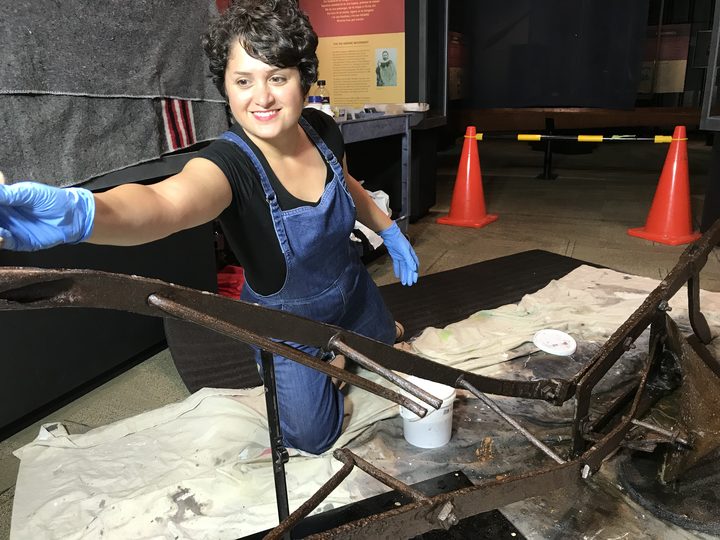 The government apologised last year for the October 1881 sacking of the Taranaki village, which had stood in peaceful resistance against British land confiscation.

Hundreds of British troops invaded the village after a proclamation from Native Affairs Minister William Rolleston, while the people offered no resistance.

Many of the women of the village were raped and molested, while the men were attacked and their leaders Te Whiti o Rongomai and Tohu Kākahi were imprisoned for 16 months without trial.

Te Whiti o Rongomai had famously told his people two years before: "Go, put your hands to the plough. Look not back. If any come with guns and swords, be not afraid. If they smite you, smite not in return. If they rend you, be not discouraged. Another will take up the good work."

Auckland-based conservator Mahshid Ezbarami has been treating the plough near its display plinth in the Takapou Whāriki gallery at Puke Ariki museum in New Plymouth.

The process involved removing rust from the single-furrow parau (plough) and brushing it with an acid solution to stop rust from spreading, and removing remnant soil from grooves.

"It was in a stable condition, but it was rusty and the remnant soil could keep the humidity," Ms Ezbarami said.

"Most of the objects in the museum have a cultural and historical value and we need to make sure they are in a good condition for their long-term survival."

Puke Ariki manager Kelvin Day said it was the first time the plough had undergone conservation treatment and it was important in terms of its preservation for the people of Parihaka and future generations.

"The plough is a rare survivor of that time, and that, combined with its history, makes it a potent and powerful object."

The parau is a nationally significant item and was on display in front of the signing table at the Parihaka Reconciliation ceremony in June last year.