Opinion - Two former prime ministers are among those calling for more New Zealand colonial history to be taught in schools. Here, Jim Hay-Mackenzie explains how far we've come and where we've got to go. 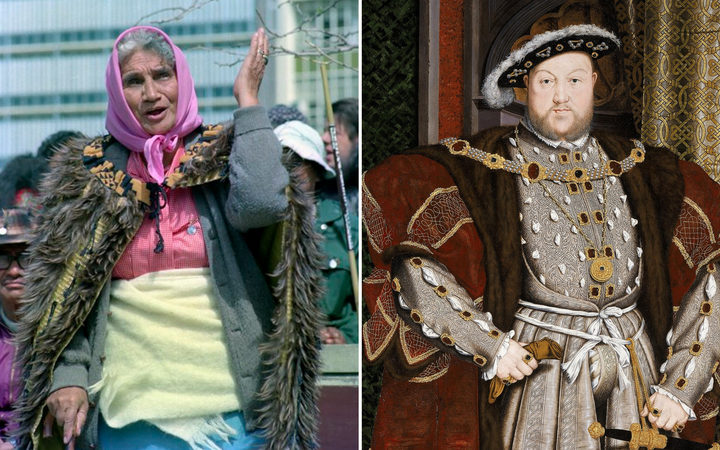 Dame Whina Cooper and Henry VIII of England: Why are some schools still choosing to teach Tudor-Stuart history over New Zealand's own past? Photo: Alexander Turnbull Library / Google Cultural Institute

As a kid I loved history because it was a subject about perspectives.

At school, I learnt about the important men and women of history. Understanding the perspectives of Stalin, Hitler, Michael Joseph Savage or Dame Whina Cooper meant understanding how the modern world was shaped.

Later, I learnt that those who wrote about history also had different perspectives, manipulating how we viewed the past.

I learnt that history was not only about leaders, but workers, women and the dispossessed.

When I started teaching in the mid 1990s, the history topics we taught were prescribed. Many of them were the same I was taught at school; my mother commented she had done some of the same topics in the 1960s.

Some New Zealand topics were taught during fifth and sixth form (Year 11 and 12), while seventh form students (Year 13) had the choice of either Tudor-Stuart England or New Zealand in the 19th century.

For schools, the Tudor-Stuart option was the most popular, showing that New Zealand was yet to completely break from its colonial past.

Despite the prescribed nature of the topic, I still enjoyed how students could empathise with people from the past - and how history could help them grow into tolerant and informed adults.

I remember teaching the history of social welfare in New Zealand to middle-class Pākehā students. This was about the time the National government was dismantling the welfare system, and many of their parents were strong National Party supporters.

Despite this, students were able to understand how welfare had benefited society in the past and today.

In recent years, a new curriculum and re-alignment of NCEA assessments has allowed greater freedom for history teachers. With broad achievement objectives and the end of prescribed topics, teachers are allowed to develop courses based on the interests and background of their students.

Many teachers have embraced this freedom. A quick look on the New Zealand History Teachers' Facebook page shows teachers dealing with a diverse range of events and topics, such as Hiroshima, Parihaka and Rwanda.

The traditional World War I and World War II topics are also taught, but with a specific focus on how different groups and people (such as conscientious objectors, Māori and women) viewed and were affected by war.

However, the old topics and perspectives of history persist. It astounds me that the Tudor and Stuart period is still taught in New Zealand classrooms. Some teachers are still dependent on history textbooks that I used in the 1990s. The grand narratives are still alive and well in some classrooms, such as New Zealand's so-called united patriotic response to WWI.

The teaching of history now needs to evolve further. In New Zealand / Aotearoa, there are still histories yet to be told.

Place-based education is an approach where teachers can make direct links to the students' local history. It requires more than just teaching a New Zealand topic, but focussing on topics that are important to the students, their community and area.

Te Takanga o te Wā, a new framework for teaching Māori history from Year 1 to Year 8, is one way teachers can be responsive to iwi, hapū and whānau perspectives.

It is not only what we teach, but how we teach.

History teachers can be notoriously chalk-and-talk. Teachers need to use methods that allow students to share their culture and knowledge in their learning, rather than the teacher being the fount of all knowledge. Rather than focussing on the recall of historical facts, we need to teach 21st century skills such as critical thinking, collaboration and problem solving.

Perspectives are still pivotal to history. For the subject to remain relevant, educators need to recognise the range of different experiences in their classroom and community.

Jim Hay-Mackenzie is deputy principal at Flaxmere College in Hawke's Bay and has taught history for 20 years.