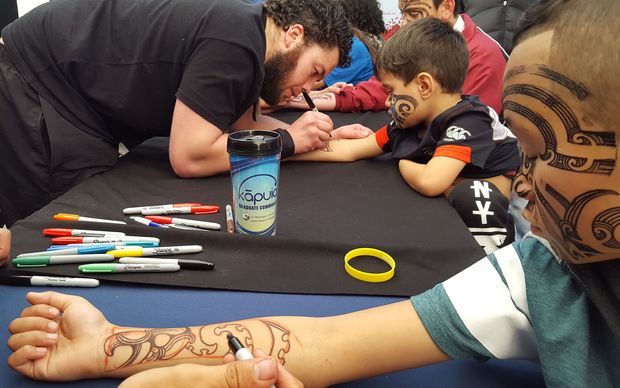 Rangatahi were getting inked up with temporary moko for their performances. Photo: RNZ / Shannon Haunui-Thompson

Stamping loudly and singing like tūī, the students have spent hours practising for their moment on the stage.

The boys of Hato Pāora College, performing with poi, brought the crowd cheering and clapping to their feet.

The boys-only school proved they could use poi just as well as any girl after a proposed rule change which could have forced them to perform with mau rākau instead was struck down.

The competition started 16 years ago, and many haka exponents said the level of performances had only got better over the years.

With 39 schools competing, each team has 40 performers - adding up to more than 1500 rangatahi on stage. 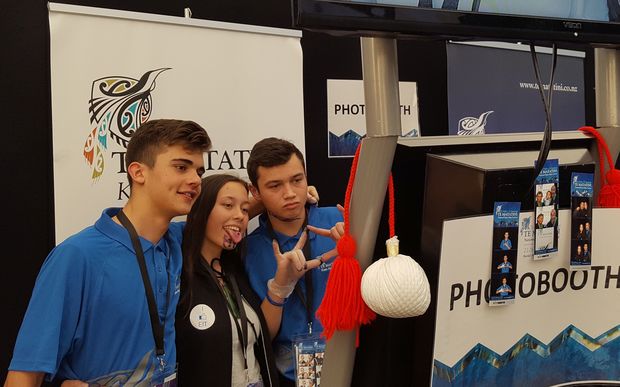 Paraone Gloyne of Te Wānanga o Aotearoa said thousands of hours went into preparing for each performance like a sports team.

"The difference with kapa haka is the groups have put their heart, soul, blood, sweat and tears into 30 minutes on stage and some of them make it 60. But once they perform, that's it - there is no going back, they can't say 'well, we can do this next time'."

He said a lot of work went into each performance on stage and behind the scenes.

"You don't just pull a composition out of the air - not just the writing, but the research that goes into it. I've been listening to all the items and some of them are thoroughly researched."

He said there were also many other volunteers providing cooking, or who stayed up all night sewing pare and getting their uniforms together and the parents who drive them to practise."

One parent, Hera Douglas, said her son had practised for hours with his group on their performance.

"They'll have noho every weekend and then lunchtimes, and closer to the time they'll also practise at night."

She said that had great benefits for her son and his friends.

"It's about strengthening their relationships as friends, it's a good opportunity for them to work together and learn new things."