Descendants of a Māori chief whose portrait by Charles Fredrick Goldie was sold for $1.175 million fear the painting will be taken outside of New Zealand.

It was all smiles and cheers at the International Arts Centre in Auckland on Wednesday when the 1941 portrait of Ngāti Manawa chief Wharekauri Tahuna by Charles Fredrick Goldie was sold for the record-breaking price.

But there was a more sombre reaction when the news hit local Māori in Bay of Plenty. 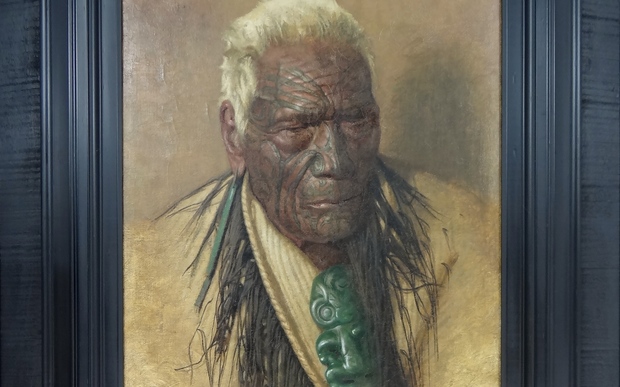 There was a feeling of shock, horror and hurt, he said.

"This is all about money and investment and the question is, do our paintings, do our images, do they belong in that world? Not for us."

The koroua was a special man, a tohunga or expert in karakia and was one of the last in the area to bear a full facial tāmoko, Mr Bird said.

There were fears amongst the whānau that the portrait would be taken overseas.

They would not speak to the media until other relatives from Taranaki and Ngāti Raukawa were contacted to come up with a plan of action.

"For us, Wharekauri is still a very much a live part of our memory, a part of a continuum we have from that world, the spiritual world, to today and to successive generations.

"The only place that he will have an authentic relationship is amongst his own here in Aotearoa."

Te Runanga-o-Ngāti Manawa chairman Kani Edwards said the iwi was not told that the painting was to be sold.

Despite receiving a treaty payout, Mr Edwards said the iwi could not afford to bid for the piece on its own but had it been given a heads up it could have come up with a plan.

"There needs to be more korero with the iwi about these type of tāonga that are coming up for sale...I am not saying we would have paid $1.3 million but we could have done something else, I do not know - a joint venture or something.

"We do not want to lose this tāonga and it be taken overseas because the reality is that we are probably never going to see it again."

Buyer believed to be New Zealander

International Art Centre director Richard Thomson said it could not reveal the identity of the buyer but believed it was a New Zealand citizen who wanted the painting to remain in the country.

The Ministry for Culture and Heritage said it would only be involved after the sale because it was a private sale to a private buyer.

But spokesperson Tony Wallace said the piece fell under the Protected Objects Act, which meant a buyer would have to apply to the ministry and receive permission before it could take the work out of the country.

The process of deciding whether to grant permission involved seeking the opinions of experts, not whānau or iwi.

Wharekauri Tahuna reportedly appears in three other Goldie portraits, two of which are part of collections at the Auckland War Memorial Museum and Te Papa Tongarewa.

The chief's descendants will talk over coming weeks in the hope that this portrait also ends up in a similar place, and not overseas.