A rare painting by European painter Charles F Goldie, 'No Koora te Cigaretti' is expected to reach more than $200,000 at an auction in Auckland next month. 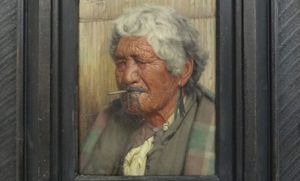 The portrait is of Ahinata Te Rangitautini, or Kapi Kapi, who survived the 1886 Tarawera eruption and witnessed the assault of Pukeroa Pa at Ohinemutu.

The Arawa Chieftainess who lived to 102 was one of Goldie's favourite sitters and he painted her at least 22 times.

A kuia from Tuhourangi said Kapi Kapi was a tohunga, had great mana and was a guide for her people.

Mrs Gardiner said that Kapi Kapi, like other tohunga, could see the world was changing and their powers may not be used for good.

She said Kapi Kapi dwelt in both the natural and spiritual world, and Golide captured that essence and she is grateful to Goldie for preserving that.