Up to 80 kōiwi [human remains] have been returned to Whanganui iwi for an emotional burial. 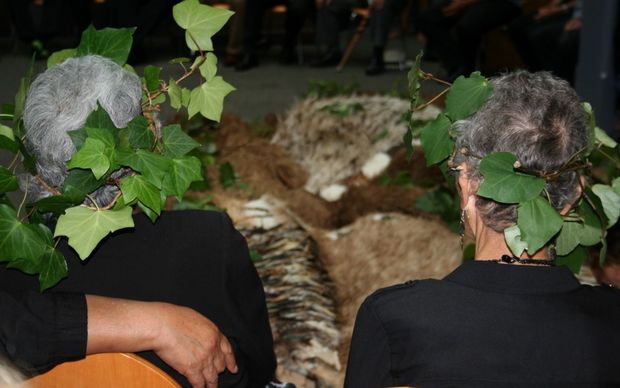 Kuia at the pōwhiri. Photo: Supplied

Most of the remains had been kept in storage at the Whanganui Regional Museum but some had also been held by Te Papa National Museum in Wellington.

Whanganui iwi leader Gerrard Albert said not a lot was known about the remains but it was widely accepted they were from his district.

He was at the handing-over ceremony today and said it was moving.

"Not emotional in terms of a personal connection to any of the kōiwi but really emotional because of the treatment of these remains over the past 100 years."

The mostly Māori remains had been collected from sand dunes, archaeological sites and graves.

Some had been kept in storage for up to 100 years, which was not acceptable, Mr Albert said.

The iwi was able to bury the remains and pay them the respect they deserved, he said.

"Our people had the opportunity to tangi (grieve) for them, and to deal with and process the way in which these remains had been handled. And then ensure that the appropriate tikanga, the appropriate rights were accorded to those remains, and then that they were interred in a place that was appropriate for them." 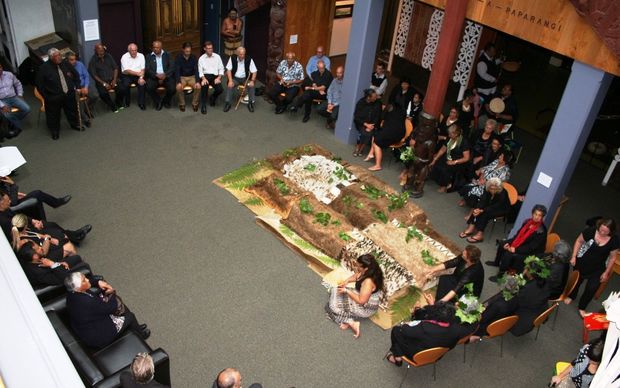 Kōiwi placed under kākahu (cloaks) at the Museum. Photo: Supplied 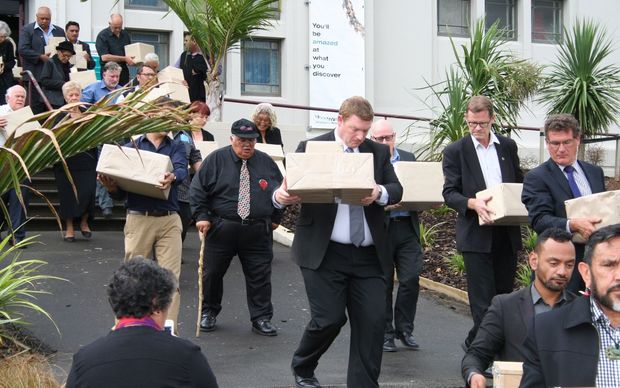 Carrying the kōiwi to the hearse for transport to the Aramoho Cemetery. Photo: Supplied

The kōiwi, wrapped in harakeke (flax paper), were transported in several cartons to Aramoho Cemetery, before being buried in plots donated by the the iwi and Cleveland Funeral Home.

"A lot of them have been eroded out of cliffs or dunes, some have been purposefully dug up during archaelogical excavations, and dare I say it, some may have been picked up from graves when people were searching for grave goods."

Te Papa representatives attended the ceremony to hand over three skulls to the iwi.

Maori co-leader Arapata Hakiwai said two of the skulls belonged to adults and one was of a child.

"The adults were very very old, they date back to the 1860s or a bit before that. And the child which was returned was from the Wellington dental school."

Te Papa has repatriated 104 ancestral remains to their places of origin.

Ms Sharpe agreed storage was no place for kōiwi today and said the museum had actively not taken human remains for at least the past 25 years.

"Many of [the remains] have been here for 100 or 50 years, a long long time. It is appropriate, and it is time, that they were buried."

Whanganui Regional Museum has a further 70 kōiwi to be returned to other tribes.