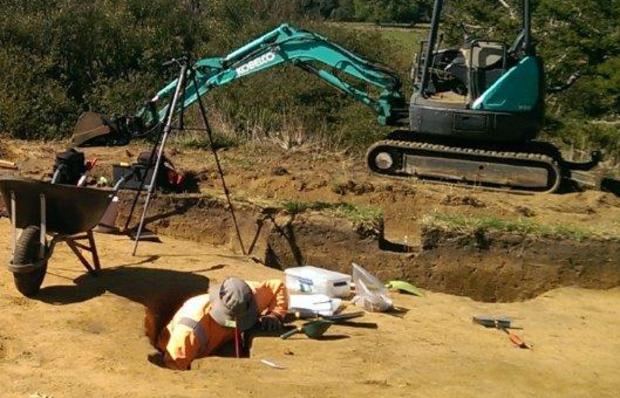 Archaeological site near Taupiri in the Waikato Region, which uncovered a a pre-European horticultural operation. Photo: RNZ / Rosemary Rangatauira

And with 85 percent of archaeological sites believed to be Māori, the trend is causing some alarm in the sector.

A professor of archaeology at Otago University, Richard Walter, said it was critical for for tangata whenua to be involved.

He said there was an increasing threat on archaeological heritage - mostly coastal zones because of climate change and rising developments projects.

"Most Māori communities have a knowledge of what they might call significant sites [or] wāhi tapu, places of figure in their cultural history and stories [and] traditions.

"But those sites are only a very very small fraction of the sites that are actually present on the landscape. In order for us to really be able to make sure that these sites continue into the future, it's really important that Māori communities are aware of the full range of sites that are out there."

The Archaeology Association said there were about 78 listed consultants working in the field.

An archaeologist, Makere Rika-Heke, is urging more tangata whenua to pursue the career.

"Knowing how to step in to the Pākehā world and stepping into a Māori world - [knowing] when to put on your tikanga hat and knowing the karakia that will keep you safe, that will reassure you and others that you know what you're doing, [and would] reassure that the tapu [taboo] elements that you're not there to do any harm.

"You're there to protect and enhance things on site, knowing how to store some of the material that you're dealing with or how to handle them. For example, you don't care of kōiwi [human remains] in the same way as you would, say, something from a rubbish pit."

The president of the Archaeology Association, Matthew Campbell, has noticed the trend of Māori studying archaeology, but later turning to Māori studies.

"I have done a little bit of teaching and I noticed in the earlier; stage one, two and three, for instance, there are a lot more Māori and Pacific Island students then you get in post-graduate.

"I don't know if they change their minds. They may have always intended to go and do Māori studies or Pacific Island studies.

"But it's good if they're got some background in archaeology but I think it would be great if some of them wanted to stay on and do more".

Otago University professor, Richard Walter, suspected there were a number of barriers.

He said there were pressures from family in particular for students to go in certain directions.

"[They] can get a bachelors degree in anthropology but it's not enough to get you a career in archaeology.

"You really need the masters, which takes a lot longer [and] requires more input and money, of course."

Ms Rika-Heke said if more Māori achieved a degree in archaeology, she believed it would force a change in the way it was taught, and the way archaeologists work in the field.