Whanganui iwi say they're proud of Prince Harry's attempt at making a speech in Te Reo during his pōwhiri today at Pūtiki marae. 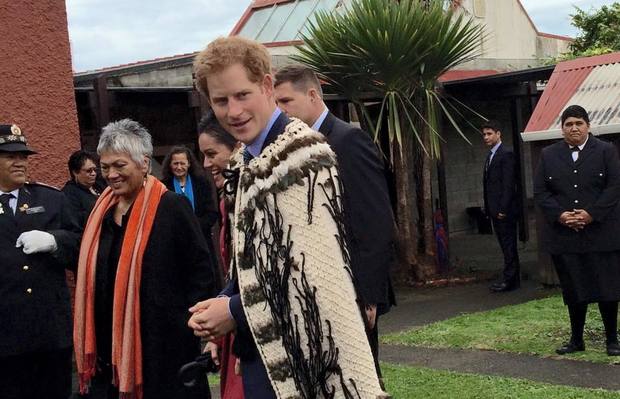 About 200 people, including the hosts, Ngāti Tūpoho, assembled at the marae to formally welcome the Prince as he spent the sixth day of his New Zealand tour in the river city.

Prince Harry said in Te Reo that, on behalf of the Queen, as her mokopuna or grandchild, he extended her royal greetings:

Translation: "This is me, the grandson of Queen Elizabeth II, the Queen of New Zealand [who greets you]."

A Ngāti Tūpoho kaumatua, John Maihi, said he was impressed with Prince Harry's efforts to deliver a whai kōrero.

"Yes I was [impressed], yes - to actually do a Māori speech, I thought that was well done," Mr Maihi said.

Prince Harry also mentioned his uncle, Prince Edward, who tutored at Whanganui Collegiate for a year and the connection his family has with the rohe.

After the pōwhiri, the prince was presented with a hoe, or a paddle, before he boarded a waka and paddled up the Whanganui River.

He later concluded his visit with a public walkabout at the War Memorial Centre.

A few shots of the crowd today outside the War Memorial Centre in #Whanganui. #RoyalVisitNZ #PrinceHarry pic.twitter.com/lqhNdSBxdO