What is contemporary Māori art? The question was debated at the recent Toi Māori Art Market in Wellington.

Art, music, fashion - all of it Māori and all of it modern but many with traditional forms blended in were exhibited at Toi Māori Art Market at the weekend.

Well-established Māori artists such as Paratene Matchitt and rangatahi artists mingled with the public who were given the chance to buy works. 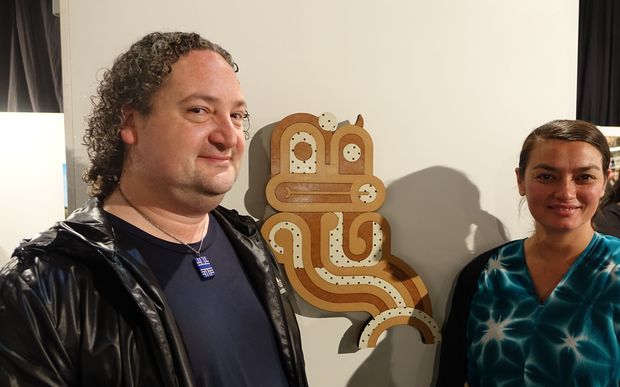 Nigel Borell, associate curator Māori at the Auckland War Memorial Museum, said there was no one definition of what contemporary Māori art encapsulated and it was hard to define the difference between what is a Māori taonga (treasure), such as a historic carving, and what was "art".

"Taonga are usually heritage items that talk about Māori culture from the past, however, we have been having really interesting conversations about how contemporary Māori art is the new taonga of the new continuum. No one would dare say that a piece from Paratene Matchitt or Fred Graham is not moving into that realm of being a taonga - not just for an art community, but the nation."

Mr Borell said contemporary Māori artists aspire to say something new, be innovative and walk a fine line to show a connection to heritage, but also be unique.

Anna-Marie White, a curator at the Suter Art Gallery Te Ara Toi O Whakatū, said being tāngata whenua is at the essence of contemporary Māori art.

"The one that I adhere to and is generally accepted in principle is that if you have whakapapa, everything you make is Māori art. Within that position there is a lot of liberty and freedom because you are able to challenge and test what Māori art looks like given our current times."

"Māori artists work in a society that gives far greater status and value to Māori symbolism in art than [it does] to socio-economic issues affecting tāngata whenua. The aims of Māori artists do not always sit well with Pākehā," she said.

"The Māori art movement is about aspiration, autonomy and tino rangatiratanga and those positions are not accepted by mainstream New Zealand. There is a point at which some Māori art that accords with Western tastes is promoted over and above other art work which fulfils the desires of the Māori art community." 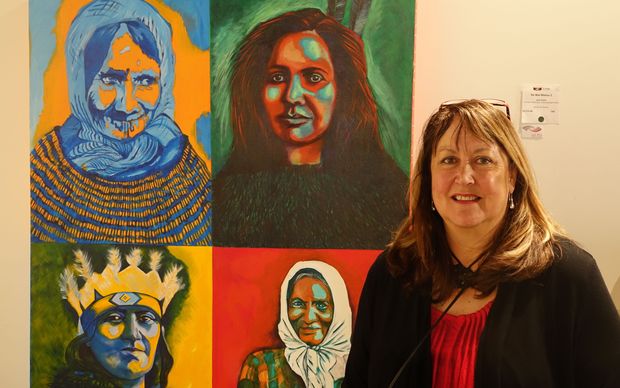 June Northcroft Grant with one of her works. Photo: RNZ / Laura Bootham

Initially, she was taught traditional Māori art forms before delving into other mediums, and like other artists wanted to take it out of its traditional context and into art galleries.

"It's a really exciting part of the art world and we could see there was going to be a future [in contemporary art] and so even though I had a traditional background, I learnt how to make piupiu. Emily Schuster was my first tutor so I learnt how to do that and tukutuku and other traditional art forms, but to actually see them in other materials which we'd never thought about."

The event at the weekend was well attended. Actor Cliff Curtis said he was impressed by the quality and snapped up a painting.

"What I'm really appreciating is the innovation that's going into the work now. There's been a steady maturation process and I can see there's this flourishing happening right now where the mediums are really being explored and expanded on." 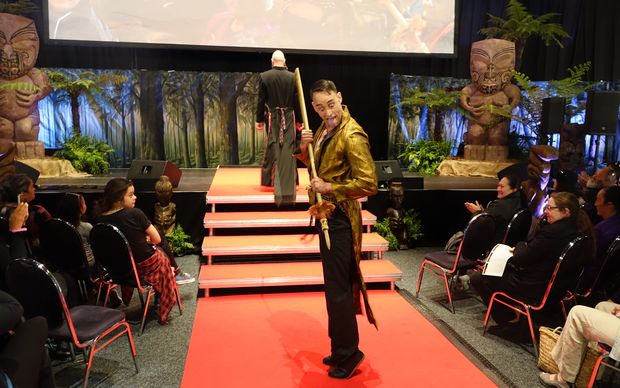