A leader of a Ngai Tahu Runanga says seals are causing problems on Titi/Muttonbird Islands where tangata whenua go hunting for the birds. 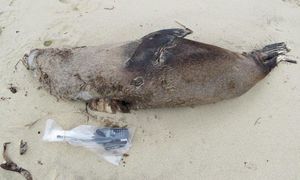 The adult male fur seal is the third to be killed this year. Photo: Department of Conservation

Three seals, two critically endangered sea lions and one New Zealand fur seal, have been shot on nearby Rakiuira/Stewart Island.

One was found last week by trampers with a hole in its side, suggesting that it had been shot at close range with a rifle.

Michael Skerrett, the upoko, or head of Te Runanga O Waihopai, said New Zealand fur seals are stopping birds from breeding on Titi Islands as they are taking over these areas.

Mr Skerrett said it could be possible that the latest shooting is out of frustration.