Mana Party co-vice president Annette Sykes wants the Kingitanga to step in and help reconcile the political division within Maoridom.

Labour was clearly the voters' choice, outbidding both the Maori and Mana parties in six of Maori electorates. 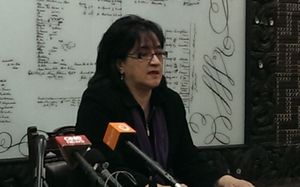 Annette Sykes, who lost her bid for the Waiariki electorate, reflected on the division within Maoridom and suggested her party needed to explore other options if it wants to change the government.

She told Te Manu Korihi she would like to see some leadership from the Kingitanga to explore the sense of motuhaketanga - Maori autonomy - which has been diluted by politics.

However, Ms Sykes did not want to take away from winners such as Labour's Te Tai Hauauru MP Adrian Rurawhe, and Peeni Henare, who secured Tamaki Makaurau, saying they both hail from a lineage of leadership and she wished them well.

A spokesperson from the Maori King's office told Te Manu Korihi it had no comment.