A group of ex-board members and parents at a Northland school are ignoring warnings from the Government and going ahead with an "illegal" election to create a new Board of Trustees. 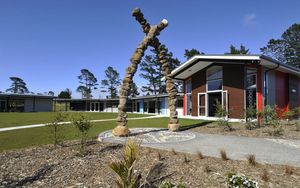 On the first day of the school year, 42 of the 85 tamariki attending the kura were pulled out by their parents, partly in protest over how last year's Board of Trustees election process was handled.

In June, the Ministry of Education dissolved the board of trustees and appointed Larry Forbes as commissioner to investigate last year's election process at Te Kura Kaupapa Maori o Whangaroa, to provide governance in the board's absence, and to oversee a new election.

Mr Forbes sent an open letter to parents and ex-board chair Terry Smith in late August warning that an advertisement in the local paper inviting nominations for board representatives was illegal.

That was the catalyst for the group halting the election process for a new board of trustees at that point. However, a new announcement has been made despite the group having been told holding an election would be illegal.

The ex-board members and parents, who define themselves as Te Kura Kaupapa Maori o Whangaroa whanau, said in a press release that they were going ahead with a voluntary election and they had filed an application with the High Court in Whangarei.

They said they were fed up with the ministry's continued "mishandling" of matters and had no faith that it could resolve the issues.

The group also took aim at the commissioner, claiming he was one-sided in favour of the parents who had removed their children from the kura, and that some of his statements and actions actively undermined kura policy and that his methods created mistrust.

Ministry of Education head of sector enablement and support, Katrina Casey, said in a statement that the ministry was disappointed by their actions.

Ms Casey described the group as largely made up of former board of trustee members who were unhappy that their board was dissolved.

She also said they did not represent the views of the majority of parents at the kura, who she said supported Mr Forbes' work in making the school a stable environment for children to learn in, and said the ministry had complete confidence in him.

Ms Casey said Mr Forbes had the backing of Te Runanga o Whangaroa, which is made up of representatives from the Whangaroa community and local marae.

She said a decision to intervene in a school is never taken lightly, and the ministry intervened after a large number of complaints from whanau at the kura.

The ministry said if the group attempted to tell parents that the election was legal, that would be misrepresentation.

Information received by Radio New Zealand under the Official Information Act showed there were 11 staff at the beginning of the year, but between January and 4 May, three teaching staff left the Whangaroa kura, leaving just eight, well below the required number.

Two permanent support staff also left during that period, but in July another teacher joined the school.

The kura still needs one full-time teacher and is currently advertising for one.