The Crown has returned a historic flag to Ngai Tuhoe to help right injustices the iwi has suffered at the hands of the Crown. 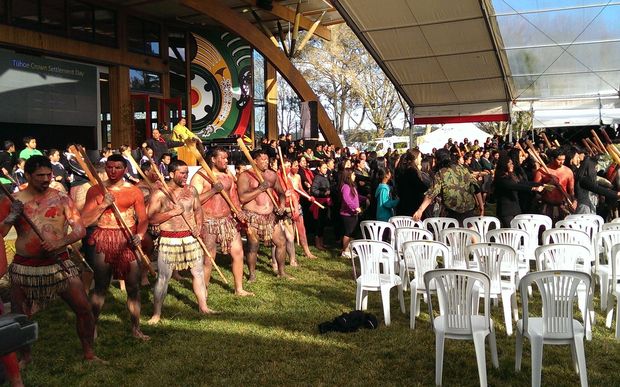 A powhiri was performed for the Crown at Taneatua today, marking its formal apology to Ngai Tuhoe. Photo: RNZ

About 2000 people gathered in Taneatua today to hear the formal apology from Treaty Negotiations Minister Chris Finlayson, as agreed in its settlement.

Mr Finlayson apologised to the iwi for the injustices, indiscriminate raupatu and wrongful killings of their ancestors.

To help restore those injustices, the Minister returned a flag which flew at the sacred settlement of Maungapohatu in 1916, and was taken by the Crown as evidence Tuhoe prophet Rua Kenana was arrested.

The story of Rua Kenana and Maungapohatu, is one of many examples of the wrongdoings by the Crown to Ngai Tuhoe.

The iwi were also given back a taiaha, which was gifted to the Premier John Seddon in 1894.