The people of Tuhoe have accepted an apology from the Crown for killing their ancestors and brutally taking their land, but say they will never forget what happened.

It follows the signing of a $170 million Treaty of Waitangi settlement last month. 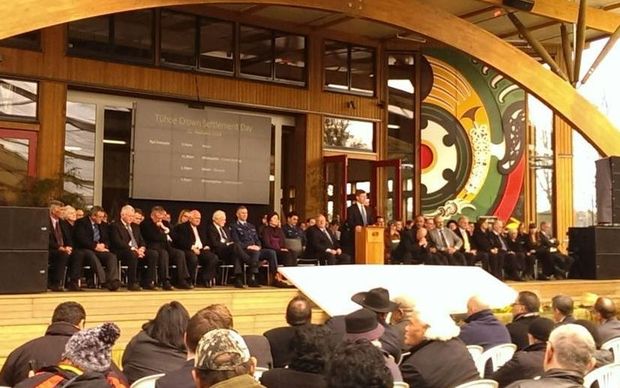 The party representing the Crown was welcomed into the Tuhoe heartland at Taneatua, south of Whakatane in Eastern Bay of Plenty, with a thunderous haka by hundreds of tangata whenua.

In front of a crowd of about 2000, Mr Finlayson apologised for land confiscations, wrongful killings and scorched earth warfare which killed hundreds in the tribe in the 1800s and early 1900s.

He says the Crown is deeply sorry for its unjust and excessive behaviour and the burden carried by generations of Tuhoe who will still suffer greatly and carry the pain of their ancestors.

"The relationship between Tuhoe and the Crown - which should have been defined by honour and respect - was instead disgraced by many injustices including indiscriminate raupatu (confiscations), wrongful killings and years of scorched earth warfare."

In response, Tuhoe leader Tamati Kruger said the iwi accepts the apology - but not everyone in the iwi has reached the ultimate level of forgiveness.

"It fell short of the ultimate tatau pounamu, which is the highest order of forgiveness and moving on, but we are nearly there. And it's for the next generation to achive that."

In Tuhoe's $170 million settlement, Te Urewera National Park will become a new legal entity governed by a board of iwi and Crown appointees.

The day was also a celebration the tribe, with entertainment for the thousands who have travelled to Taneatua.

The apology in full

"To the iwi of Tūhoe, to the tipuna, the descendants, the hapū and the whānau, the Crown makes the following long-overdue apology.

"The Crown unreservedly apologises for not having honoured its obligations to Tūhoe under te Tiriti o Waitangi (the Treaty of Waitangi) and profoundly regrets its failure to appropriately acknowledge and respect te mana motuhake o Tūhoe for many generations.

The relationship between Tūhoe and the Crown, which should have been defined by honour and respect, was instead disgraced by many injustices, including indiscriminate raupatu, wrongful killings, and years of scorched earth warfare. The Crown apologises for its unjust and excessive behaviour and the burden carried by generations of Tūhoe who suffer greatly and carry the pain of their ancestors.

"The Crown is deeply sorry for its failure to make amends for the way it has treated Tūhoe despite the honourable conduct of your leaders. Tūhoe were committed to the peace compact agreed with the Crown in 1871, despite Crown pressure to allow surveys, roads, and the operation of the native land laws to open up Te Urewera.

"The Crown later denied Tūhoe the right of a self-governing reserve by subverting the Urewera District Native Reserve Act 1896. The Crown purchased much of Te Urewera illegally and its actions left Tūhoe bereft.

"The Crown apologises for the exclusion of Tūhoe from the establishment of Te Urewera National Park over their homelands. The Crown also apologises for wrongly treating Lake Waikaremoana as its own for many years.

"Despite the hardship Tūhoe and Tūhoetanga endure, your culture, your language, and identity that is Te Urewera are inextinguishable. The Crown acknowledges you and te mana motuhake o Tūhoe.

"Let these words guide our way to a greenstone door-tatau pounamu-which looks back on the past and closes it, which looks forward to the future and opens it."