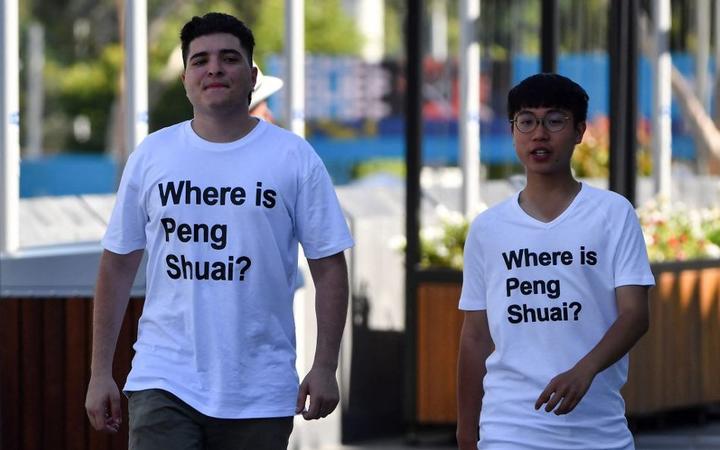 Drew Pavlou, left, who has raised funds for the distribution of the T-shirts, welcomed the decision to overturn the ban on wearing them to the Australian Open in Melbourne. Photo: AFP

It comes after security and police at Melbourne Park on Friday ordered two spectators to remove their T-shirts and a banner with the message "Where is Peng Shuai?".

Tennis Australia said it confiscated them because they were political, but it has now softened its stance.

A spokesperson said the body would now take a common-sense approach to ticketing conditions and it would allow certain messaging as long as there was no disruption to the event.

When asked about the lifting of the ban, Minister for Foreign Affairs Marise Payne said there should be no problem offering support for Peng at the Australian Open, as long as it is "done in an appropriate way and does not disturb the courts themselves".

Peng's wellbeing became a matter of concern among the international tennis community and human rights groups when she appeared to allege former Chinese vice-premier Zhang Gaoli had sexually assaulted her in the past.

After the social media post was made, she was absent from public view for almost three weeks. 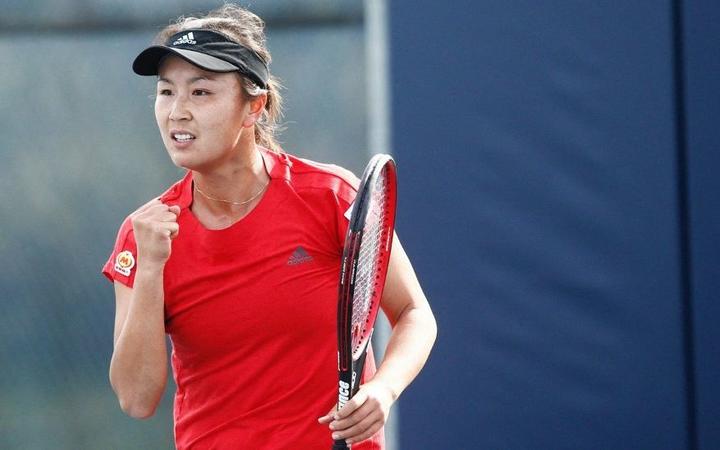 When she did appear in public again, she said that she had never accused anyone of sexually assaulting her and that the social media post had been misunderstood.

News of the decision came as the activists behind the campaign were making their way to Melbourne Park, with plans to wear the T-shirts again on Tuesday.

Max Mok, a human rights activist who was involved in the initial protest on Friday and is running for a seat in federal parliament, welcomed the news and said 1000 T-shirts would be handed out on Saturday at Melbourne Park ahead of the women's final.

"Let's hope Tennis Australia keep to their promise and let the crowd wear them," Mok said.

Mok said he hoped Peng would now enjoy more "regular freedoms", as a result of public advocacy in Melbourne and around the world.

"Can she actually start doing interviews with Western media? Can she play in tennis matches outside the country?" he said.

Drew Pavlou, who is also standing for election and was behind the GoFundMe campaign to print the T-shirts which has now raised over $A15,000 ($NZ16,040), said the news was "excellent".

He claimed that Tennis Australia confiscated the T-shirts initially because of large sponsorship deals with Chinese companies.

"They were so worried about losing powerful sponsors, but the backlash from this campaign was even more powerful," he said.

"Human rights do not exist outside the sporting environment, they are inherent in everything we do, including hitting a tennis ball, kicking a football or swimming," Foster said.

"Sport everywhere, and particularly in democratic countries where freedom of speech is a vital social pillar, cannot allow itself to be shaped by commercial interests at the expense of human wellbeing.

"Sport should not sell its soul, no matter who or how much is on offer."

Tennis legend Martina Navratilova tweeted on Sunday that the confiscation of the T-shirts and banner was "pathetic".

This is excellent news- well done Australian Open and kudos to Craig Tiley for doing the right thing here!!!#whereisPengShuai https://t.co/TdmEzpHQlY

French player Nicolas Mahut, who lost in the first round of the doubles at this year's tournament, suggested on Twitter that organisers were bowing to corporate sponsorship from China.

"What's going on!? What lack of courage! What if you did not have Chinese sponsors," he wrote.

He included in his tweet #1573, the name of a Chinese distillery that has the naming rights to show court two at Melbourne Park.