The brother of New Zealand's most celebrated Olympic medallist Lisa Carrington says she's represented strong Māori women on the world stage and "cleaned up" at the Olympics. 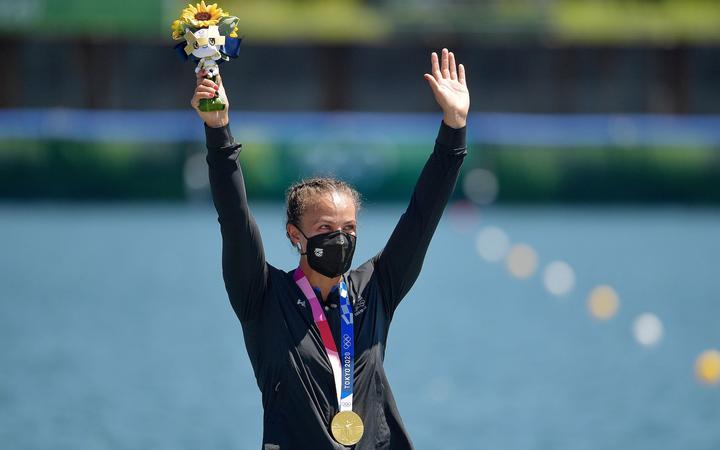 Carrington yesterday won her third gold medal of the games, and sixth medal overall, to become the country's most decorated Olympian.

Her older brother Brett Carrington said her constant drive is to better herself, and the accolades are a "by-product".

He spoke to Morning Report from Queensland, where he said he has been stressed out watching the races and has been in close contact with the family.

"I think we get a lot of these anxiety kinda jitters, not the sense that we aren't sure what she's capable of, but I don't think you can help yourselves when she puts that much pressure on herself, we kinda feel that as a family as well.

"I've probably been facetiming my parents every half an hour, it's been 20 minutes between races.

"Unfortunately we're actually in lockdown in the Gold Coast, but the good thing about that is I'd usually be at work but I'm at home now so I can kinda scream at the top of my lungs and my workplace won't hear me."

"With Lisa, she went to London and to everybody's surprise won the 200. I think Gordy was surprised, her coach was surprised that she won that 200. And from winning that gold medal in London in the 200, everyone was going, 'holy shit, what has she just done?'"

Brett Carrington said he was "obviously honoured to be her brother" and said his sister wasn't there for medals and accolades, but to be better than her previous self.

"The thing is every time she gets better, it makes it a lot harder for everyone else to catch up. So the rest of the world's playing catch up and she's just the by-product of how good she is, how much pressure and discipline and how much faith she has in her ability. All these accolades and things like that, they're just a by-product of it.

"As much as you probably put that pressure aside, it's still there because you are representing Aotearoa, you're representing strong Māori women, strong women in general, so for her to finish what she set out to do, she didn't just win, she absolutely cleaned up these Olympics."

Once she returns home from the Games and completes her time in MIQ, Carrington said his sister would first "just play with her dog to be honest", before catching up with family and friends.

"I think she'll just spend a lot of time just relaxing, chilling out. she'll definitely need it for sure," he said.

Having followed the work she had put in behind the scenes over the last five years, he said the end result was phenomenal.

"To be able to come out on top and really showcase who she is and what she stands for and what kind of athlete she is and ambassador she is for a sport, for strong women in general, it's phenomenal, it's kind of mind-blowing."