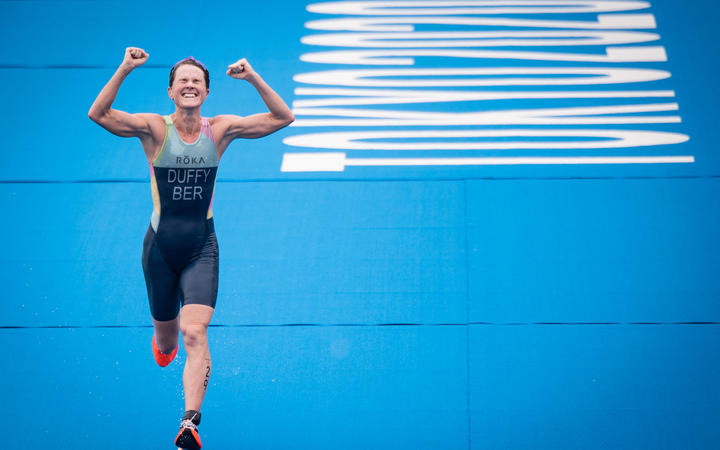 Duffy, 33, was part of a group of seven who broke clear at the start of the 40km bike leg, but then stamped her authority on the race with a fantastic performance over the 10km run to finish in one hour, 53.36 minutes.

Briton Georgia Taylor-Brown overcame a flat tyre near the end of the bike leg to chase back and take silver, 74 seconds behind.

It was not such a good day for the New Zealand competitors, who were hoping to emulate Hayden Wilde's medal-winning feat in yesterday's men's triathlon.

Duffy hailed it as "an incredible moment".

After a storm-delayed start, Duffy was part of a group who exited the 1500m swim closely together and got a jump on the main field.

That group slimmed to five, and built the gap to a commanding 80 seconds at the end of the bike, though Taylor-Brown lost 22 seconds on the final lap as a flat tyre meant she had to negotiate every slippery turn almost at a standstill.

By halfway on the run Duffy had forged 50m clear and Taylor-Brown overhauled Zaferes at the end of the third lap.

"The first lap of the run was panic mode," said Taylor-Brown. "I think I definitely paid for it in the latter part of the run but it paid off."

Duffy enjoyed every moment of her triumphant charge down the finishing blue carpet, clenching her fists in joy and celebration.

"I was very overwhelmed," Duffy said. "I didn't know what to do, or what to think. It was a really, really special moment.

"Maybe I replayed a little bit of all that it took to get here. It's great to achieve a personal thing but it's bigger than me and will inspire the youth of Bermuda and show that competing on the world stage from a small island is really possible."

The final triathlon event is the inaugural mixed relay on Saturday.