New Zealand Rugby (NZR) has offered to meet with the Players' Association later this week so the players can outline the Forsyth Barr proposal for a public share float. 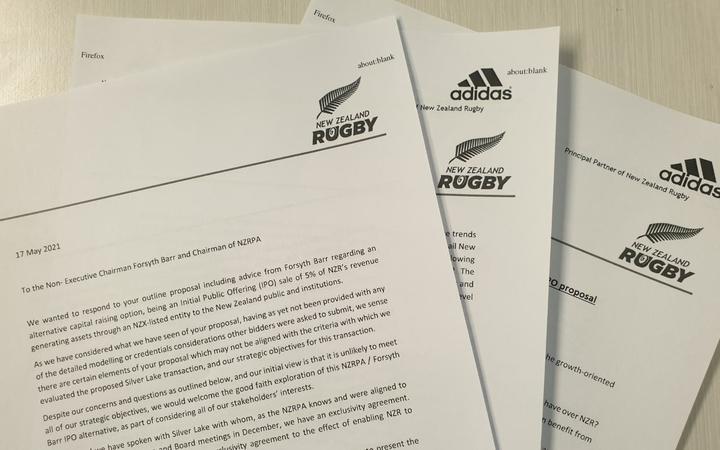 NZR and the Players' Association are at loggerheads over the Silver Lake deal whereby NZR intends selling a 12.5 percent of its commercial rights to the US private equity for $387 million.

Last week the Association and Forsyth Barr released an alternative proposal to essentially sell a 5 percent stake in the NZR's commercial interests via a share float.

NZR has rejected this but in a letter signed by chief executive Mark Robinson and obtained by RNZ, Robinson has sought a meeting with the Players' Association and Forsyth Barr on Friday asking them to outline their proposal.

The letter goes on to outline why the NZR has rejected the idea of a public listing.

"...if NZR was going to access capital from passive investors, then an IPO would likely be evaluated as an inferior option to other forms of passive, private capital investment in common equity. For instance we would anticipate other solutions that would reduce compliance costs, transparency of financial accounts and reporting obligations..."

"NZR is in a growth-investment phase of our strategy, we are not interested in simply raising capital from passive public market investors."

NZR says it concerned its relationship with New Zealand rugby fans could also turn sour under a public float.

"NZR takes the view today that to a great extent emotional ownership of Teams in Black rests with all New Zealanders, however we are concerned at the potential for a significant change in that relationship with our fans and our commercial partners if a financial ownership model were to be introduced...In the event of share price volatility, how would the reputation of our Teams in Black and our players be managed both from a fan and a commercial point of view?

"And in the converse, in the event of losses on the field, how do we manage the impact that this could have on people's investments in this entity?

"We would emphasise, that prior to selecting our current preferred path with Silver Lake, we considered an IPO structure, and determined that it did not meet NZR's strategy, nor all of our key objectives as previously outlined to the NZRPA."

Forsyth Barr believe the valuation of NZR's commercial rights (Commercial Co) is between $3.4 billion and $3.8b, 12-23 percent higher than the Silver Lake valuation of $3.1b.

"NZR would need access to the model that shows how such a valuation can be achieved... We see risks to achieving the IPO valuation, including volatile market risk and the current Covid-19 environment creating significant uncertainty, particularly in terms of critical revenue contracts that are likely to underpin your valuation. We understand Forsyth Barr are offering to fully underwrite the proposed valuation, is that a guaranteed position today?" Robinson questions.

"Finally, we would suggest that to better enable a productive conversation between us when we meet, that any planned 'media' approach designed to create 'pressure' surrounding this proposal is shelved.

"NZR do not believe that a methodology that creates a 'my Ferrari is bigger than your Ferrari' narrative through the media, will ultimately lead to a productive conversation on the substantive issues that can potentially define the future of rugby in New Zealand."