Surfing New Zealand has withdrawn support for surfers heading to the World Surfing Games to chase a spot for the Olympic Games but that hasn't stopped Paige Hareb and Saffi Vette from going it alone. 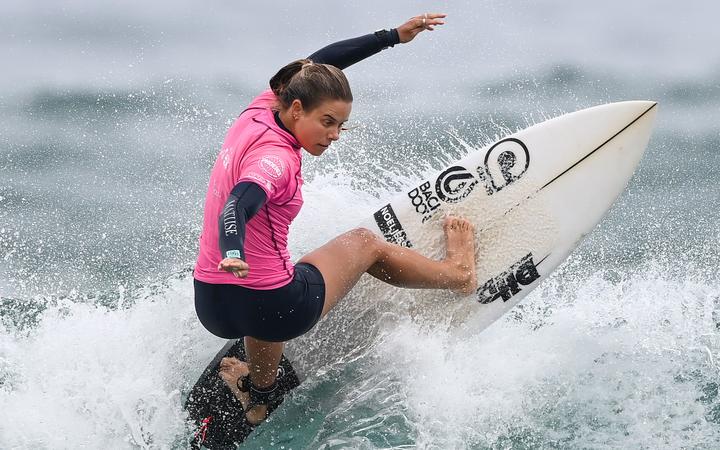 Paige Hareb will go to another World Surfing Games with her sights set on Olympic qualification. Photo: PHOTOSPORT

The World Surfing Games in El Salvador starting on 29 May is the last chance for athletes to secure a place in surfing's debut at the Tokyo Olympics and the Covid-19 vaccinated New Zealand duo leave on Sunday (May 23) to compete in the teams event.

Usually three women and three men from each competing nation take part in the world games, but Surfing New Zealand have backed out as Hareb said "they don't want to have any responsibility for us going" during the pandemic.

"They've still been as supportive as they can be without it being a legal matter, they helped us get the vaccines in time and all those sorts of things."

Plus the lure of the Olympics was too good of an opportunity to miss.

"That's pretty much the only reason I'm going, that's a big goal for me at the moment," Hareb said.

Ella Williams has provisionally qualified for Tokyo following her result at the 2019 World Games but her Olympic spot could be in doubt.

"Maximum two men and two women can go [to the Olympics] from each country, but this world games takes priority over the last world games so if Saffi and I finish above where Ella finished last time and within those seven remaining qualifying spots then we can potentially knock Ella out of going to the Olympics," Hareb said. 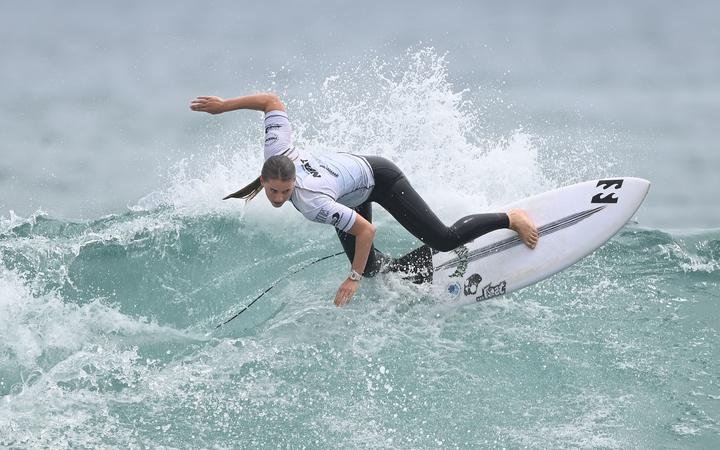 Gisborne's Saffi Vette will team up with Paige Hareb at the World Surfing Games. Photo: PHOTOSPORT

Hareb and Vette, who won the New Zealand nationals this year, will be in good company as most other countries - including South and Central American nations as well as France - have committed to attending.

"A lot of the top surfers on the women's world tour who have already qualified they have to go again, so that's the likes of Sally Fitzgibbons from Australia, Carissa Moore and Caroline Marks from America, there's definitely going to be a lot of good names there and super tough to get one of those last seven spots."

This will not be Hareb's first trip to El Salvador and after spending over a year based at home - the longest the 30-year-old had spent in Taranaki in more than a decade - she had had good preparation for the Central American trip.

"They've got really good waves, one is a big right-hand point break and it's over rocks which is like a lot of the breaks here in Taranaki and if there's anywhere that can almost give me an advantage then El Salvador is probably one of those places.

"A lot of those [other competing] countries the surf isn't that consistent and they don't have point breaks or they don't surf over a rock bottom every day, so I'm used to all of those conditions and it can give you that slight extra bit of confidence."

After 12 years touring the world surfing Hareb has made lots of friends and she hopes some of the international athletes can give her a hand to claim an Olympic spot.

"All of them on the Championship Tour that will be at the world games, they have pretty much all have already qualified for the Olympics, so in the perfect scenario it would be nice for them to keep surfing through the rounds in the competition as well as me so then they knockout the ones that I need knocking out."

Hareb and Vette will essentially being going head-to-head at the world games, even though they are team mates, but the rivalry would be kept in check.

They had even had a trial of living together.

"She came and stayed last week so we made sure that we can get along nicely because we're going to be travelling together and then sharing quarantine for two weeks together as well, by the end of it we're probably going to sick of each other but she's a great girl and I think we support each other very well and obviously going for the same thing so we understand what we need to do and what we want to do," Hareb said.

"It would be the ultimate dream if we can both come away with a spot each, but we'll still do our own thing and hope for the best for each other."

If successful in El Salvador the New Zealanders would have to head straight back to make their MIQ booking and then have a couple of weeks at home before turning around and heading to Tokyo.

If Hareb did not make it to Tokyo she said Paris 2024 was still an outside possibility.