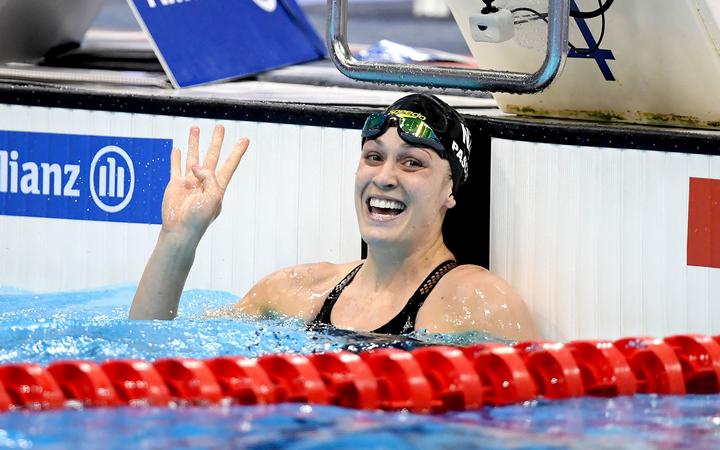 Jesse Reynolds, Nikita Howarth and Tupou Neiufi round out the squad.

They are the first group of Para athletes to be announced to the New Zealand Paralympic Team.

Between them, the five Para swimmers have hold 20 Paralympic medals and 14 long course world records and they are expected to play a major role in New Zealand's campaign at the Tokyo 2020 Paralympic Games, which starts on August 24.

Leslie was a Paralympic gold medallist and world record holder at Beijing 2008, London 2012 and again at Rio 2016.

He will be competing at his fourth straight Paralympic Games in Tokyo.

Pascoe is the most decorated New Zealand Paralympian having won 15 Paralympic medals.

She made her Paralympic debut at the Beijing 2008 Games securing three gold and one silver medal.

At her third Paralympic Games in Rio 2016, Pascoe went on to win three gold and two silver medals.

Pascoe, who has a single limb deficiency, hopes to continue to cement her place in the history books as one of New Zealand's most successful Paralympians.

Howarth was New Zealand's youngest ever Paralympian when she made her debut in London 2012 at just 13 years old.

She then went on to win a gold and bronze medal at the Rio 2016 Paralympic Games.

Tokyo 2020 will see Howarth compete at her third Paralympic Games after only returning to the sport of Para swimming less than two years ago after a very successful stint competing in Para cycling.

Neiufi was first identified by PNZ in 2011 as part of a Para swimming talent identification programme.

She then went on to make her Paralympic debut at the Rio 2016 Paralympic Games.

Neiufi is currently ranked 2nd in the world, having won the silver medal in the women's 100m backstroke S8 in the 2019 Para Swimming World Championships in London.

Neiufi has a left sided hemiplegia, meaning she has paralysis on the left side of her body.

Reynolds has been a competitive swimmer since the age of 11 and made his Paralympic debut in Rio 2016 where he swam two personal best times.

He is currently ranked 6th in the 100 m backstroke S9, where he placed at the 2019 Para Swimming World Championships in London.

Reynolds has a single limb deficiency.

Paula Tesoriero (Chef de Mission, NZ Paralympic Team) said, "We are thrilled to welcome five experienced Paralympians to the NZ Paralympic Team. The knowledge and understanding they will bring to the team will be immense and I know they will provide invaluable support to those Para athletes that are competing at the Paralympic Games for the first time."

Fiona Allan (Chief Executive, PNZ) said, "It is fantastic to announce our first group of Para athletes selected to represent New Zealand at the Tokyo 2020 Paralympic Games today. Cameron, Sophie, Nikita, Tupou and Jesse have recently competed at the NZ Swimming Championships last week and their performances have satisfied PNZ Selectors that they have met the selection criteria for Tokyo 2020 Paralympics."

Further selections to the New Zealand Paralympic Team are expected in the coming months for up to seven further Para sports. The team may include up to 45 Para athletes.