The "Aunty" of New Zealand Rugby League, Carmen Taplin, is used to working in the background but Covid-19 has put her role managing players' wellbeing under a spotlight. 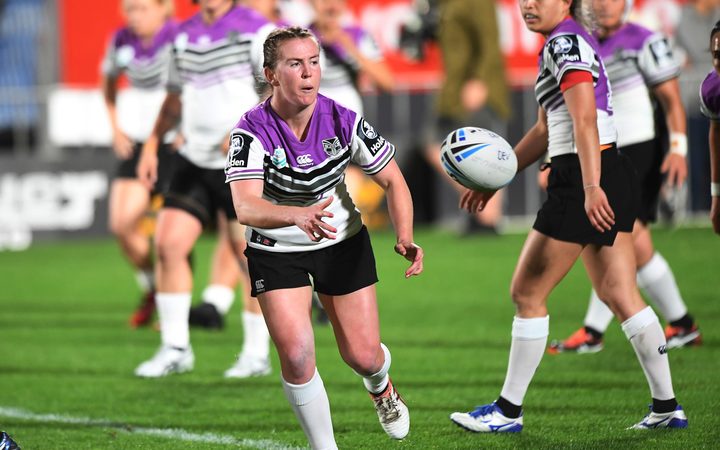 Warriors captain Georgia Hale is one a few athletes who will be looked after by "Aunty" Carmen Taplin. Photo: © Copyright Andrew Cornaga / www.photosport.nz Photosport Ltd 2018

Taplin has a history of being someone athletes turn to.

She has welcomed young players into her family home and toured for long periods with professional players offering guidance. 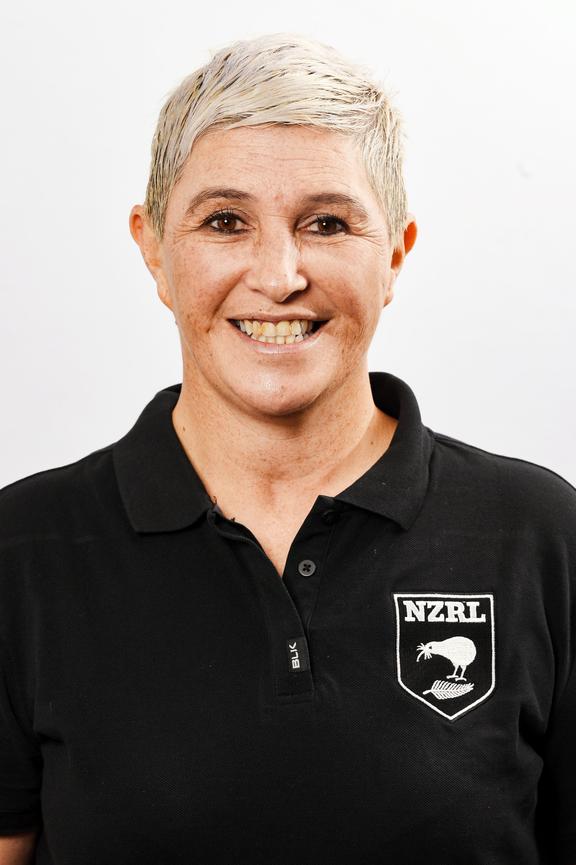 However, the the NZRL wellbeing manager has a new challenge with the New Zealand-based Warriors women players that will be based in Australia for the duration of the NRLW.

That a wellbeing manager is even part of the small team from New Zealand that has made the journey is a sign of the emphasis on athlete welfare during a turbulent time.

"It's been hard over the years, footy has always taken precedence over wellbeing managers as they were not really seen as a priority back in the day, " Taplin says.

But Covid-19 has helped change the sport's focus during a 2020 NRL and NRLW season that nearly did not happen, she says.

"I feel that definitely there has been a shift and I hope it stays that way going forward. I just think it is so important that we nurture all aspects not just the physical.

"We refer to it in our campaign now Te Whare Tapa Wha - around supporting the physical, the spiritual, mental and emotional in our whanau of relationships." 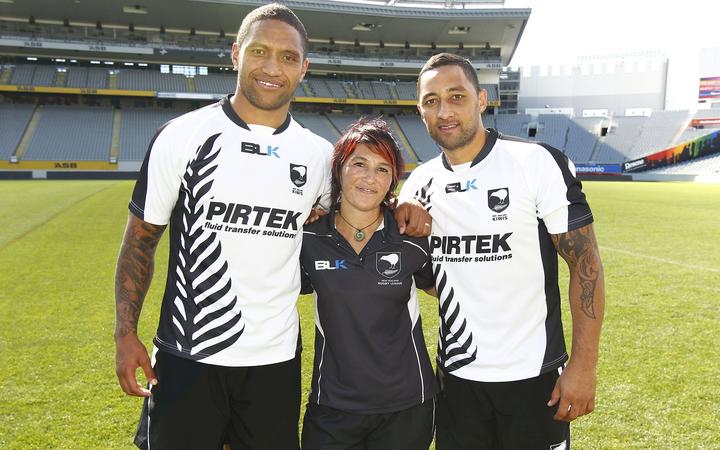 In 2010 Taplin was brought into the Kiwis management staff to help with logistics but her role quickly expanded over the four years she was with the men's national team.

"[I was there to] bring the female element to a footy staff and to add that aunty kind of feel to the squad".

Her caretaker position was a natural fit and she took it even further.

Eight seasons ago Taplin and her husband moved to Sydney with a plan to support young players.

Taplin says a couple of youth suicides in the under-20s in Australia motivated the pair to put their hand up to be house parents - an arrangement that the Sydney Roosters NRL club welcomed.

They ended up with a house full of 10 boys, including Australian representative Latrell Mitchell who now plays for the Rabbitohs and Kiwis and Roosters player Joseph Manu, during the year they spent across the Tasman. 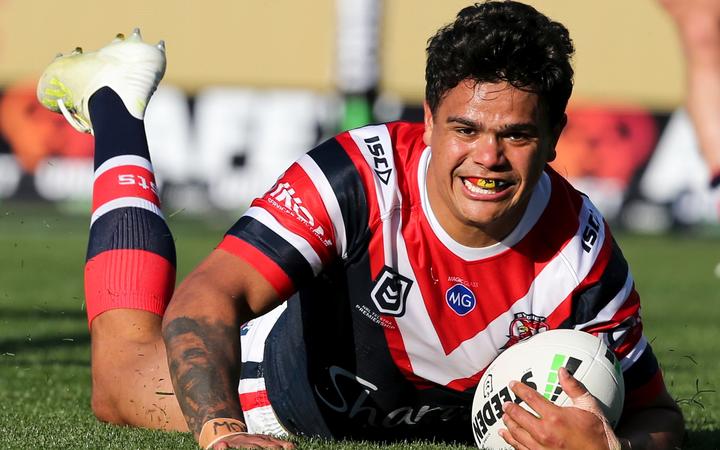 Latrell Mitchell playing for the Sydney Roosters in 2019. Photo: Photosport

It was that time in Sydney that cemented Taplin's decision to pursue a career path associated with wellbeing on her return to New Zealand.

NZRL's links with the Warriors' women's programme means she was called on as a support person for this unprecedented season which will see the players spend a 10-week period away from home with quarantine periods in Australia and New Zealand on either side of the five-week competition.

The Warriors' captain Georgia Hale with Hilda Mariu, Madison Bartlett, Crystal Tamarua and Kanyon Paul have all committed to the temporary move to Australia to take part in the four-team competition.

"Women are so different, which I love, we're very much in tune with our emotional self and I think they really appreciate that nurturing," Taplin says.

"I don't do anything magic, I'm just that ear, that someone that they trust and respect and they're comfortable to come to if little things are getting them down.

"I'll sit down and have breakfast with someone without the intention of having a catch-up or a wellbeing chat but it always eventually turns into that and I am really blessed that I am able to have that with these girls."

Taplin spent eight weeks on tour with the Kiwis in the United Kingdom earlier in her career so says she was prepared for what a long stint working away from home would be like, but she is in awe of what the women were prepared to do to be able to play this season. 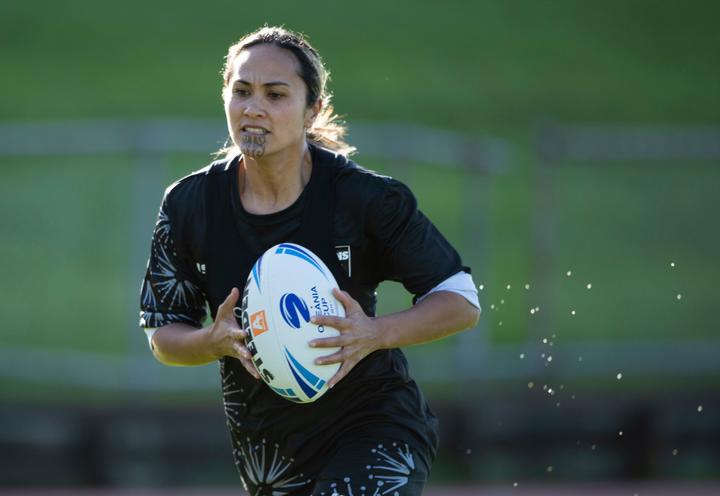 Kiwi Fern Hilda Mariu has left her two children in New Zealand to travel with the Warriors. Photo: PHOTOSPORT

"The NRL men their work is rugby league, so that was probably never an issue, but these girls have had to consciously say well can I actually get the time, 10 weeks away from home, from my work, are my kids going to be okay, and the crazy thing is they made that decision on not a lot of information.

"We still didn't have exact details, so these five girls have made the ultimate sacrifice. For a while they weren't sure who their coach would be, they were unsure who their teammateswould even be."

Jillaroos coach Brad Donald has since been confirmed as the coach for this season.

But the players are still waiting to meet the other women who will make up the majority of the squad.

The New Zealand-based players who couldn't make the sacrifice are not far from the players' thoughts, Taplin says.

"They are very conscious of the girls who wanted to be here just as much and couldn't, so they are a big part of our journey as well."

Taplin admits what she has left behind is on her mind too.

She has a 17-year-old daughter living at home and a four-year-old and she is still a house parent for one of the Warriors players.

"The real mamae or hurt comes when we start to miss our families and I feel it, it was my son's 22nd birthday on Thursday and it's the first time I have really been away from him so I felt that, but the girls they know and they support me just as much as I support them in that wellbeing space."

But Taplin did not think twice before committing to the campaign.

"I was always going simply because I knew how tough it would be for these girls to be away."

Isolation island - paradise with a purpose

The Warriors women players and two support staff - and fellow New Zealander Amber Hall from the Brisbane Broncos - are based on Milson Island, which is an hour north of Sydney, while they wait out their quarantine period. 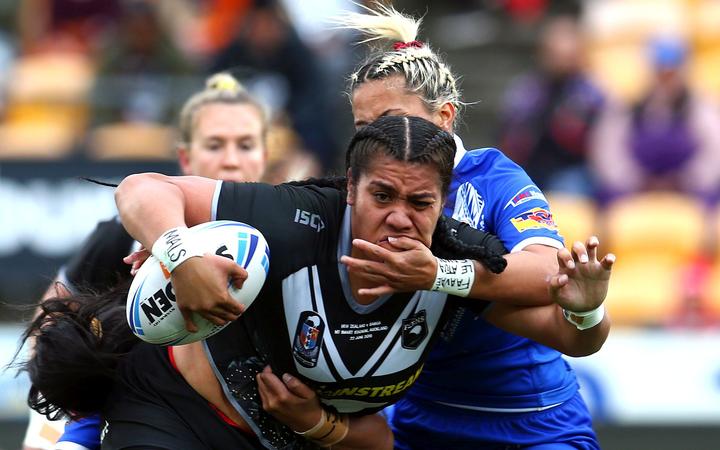 Kiwi Fern Amber Hall is with the Warriors women in isolation ahead of the NRLW season despite being a Brisbane Broncos player. Photo: PHOTOSPORT

Taplin says they are becoming a tight-knit group given the unusual circumstances.

Each morning the group karakia by the water, share what they are grateful for and sing before the physical work starts.

"In high performance sport what I've found is probably 80 percent or more is based on performance and physical but I don't think we spend enough time on those other areas and as Te Whare Tapa Wha goes if all walls of the house are not strong, you're at the risk of the house falling down," Taplin says.

Taplin says there is plenty to be grateful for while they are in "paradise" but she is also happy that the eight of them staying on the island are able to bring some relief to an area that has been hit hard by the fallout from the restrictions around Covid-19.

"Because of Covid they've had no one on this island for six months and it's a school sport and recreation camp and it's paradise.

"So the girls are getting V VIP treatment because the staff haven't had anyone here so they're pulling out all stops and there is nothing that they won't do for us and I think that put into context for us, we've made this sacrifice but we see these beautiful businesses and how it is such an amazing space and they've had no one."