The women wearing the Warriors jerseys in this year's NRLW might never have visited the rugby league club's Auckland headquarters. 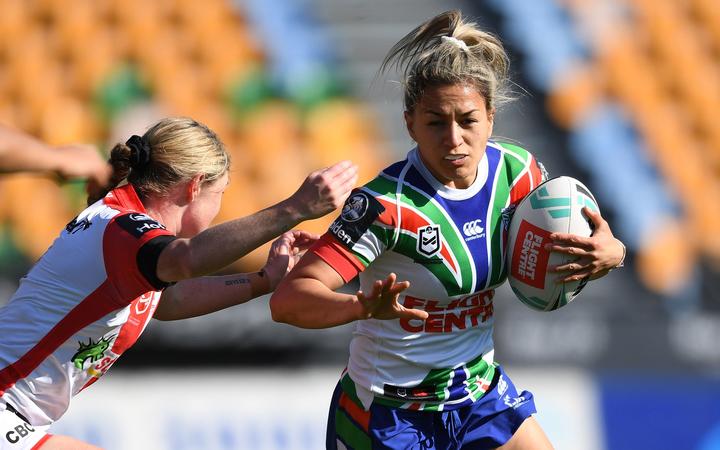 The Warriors chief executive Cameron George said the club was committed to the women's competition which is due to start in October, but a team from Auckland would not relocate to Australia to take part.

Instead a squad of Australian-based players will likely take the field in Warriors colours.

The NRLW season is contested between the Warriors, Broncos, Dragons and Roosters.

In 2020, each club was slated to have a 30-woman squad of semi-professionals, including eight development players, with the salaries ranging from $5000 to $10,000.

With the trans-Tasman bubble unlikely to be operating in time for kick-off, George said the Warriors were looking at Plan B to keep a presence in the competition.

"There might be a few options where we can have our colours play in Australia with a team based out of Sydney to fulfill our spot in the NRL, I know the NRL want us to be a part of the competition, there is no expectation that we will be relocating for a period of time - we're not going through that again I can assure you," George said.

The Warriors' men's team have been based in Australia to play in the NRL since 3 May and George was not willing to put a women's team through that as well.

"If individuals wish to get an exemption and go across because their work schedules and personal circumstances allow that, we will try and facilitate that... we'll see and we'll work with the NZRL on that because they are part of the NRLW with us."

The club appointed Slade Griffin as the new coach for the side this season however it seems increasingly unlikely Griffin will be involved this season.

George mooted a side being based at the Sydney Roosters and working under that club's management - but being Warriors' representatives in name.

In May, George told the Epidemic Response Committee the Warrior's women's side was at risk of being cut.

George said the privately owned club could not afford to keep fully-funding the women's team, but he did see one lifeline to keep a side in the NRLW.

"If we can get some significant help from outside parties for that then we will continue to invest and drive and grow that sport, because it's so important for the fabric of New Zealand that females get the same opportunity as what the males do, and we feel very good that we've provided this chance," he told the committee.

The government listened to George's request for funding and the Warriors received $200,000 from the Sport Recovery Package.