Analysis - Things weren't so super on Saturday night in Hamilton, unless you were a Blues fan. 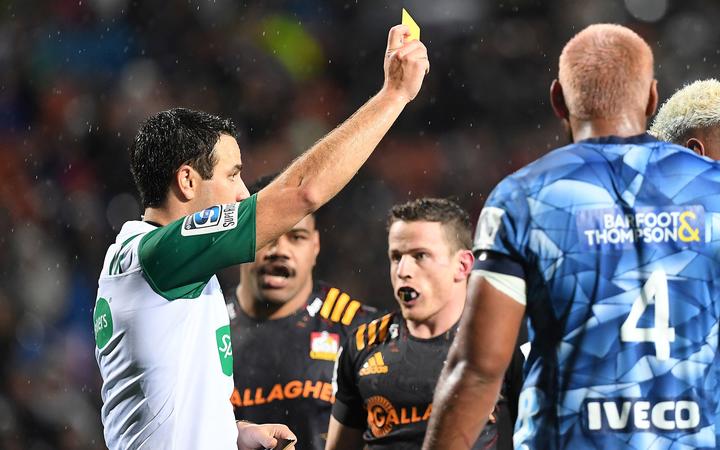 While it was incredible to see the stadium full for a Chiefs home game for the first time since they won their last title, the 23,000 people that had come in weren't being treated to anywhere near the sort of spectacle they were probably hoping for.

Admittedly this had a bit to do with the fact that their team was shorn of a lot of its talent through injury, plus they were playing against a Blues side that are living up to the hype for once. But it also had to do with the application of the strict new law interpretations by Super Rugby Aotearoa's referees.

Last year, when these two sides met at the same venue, the result was a 33-29 win to the Chiefs that was one of the most entertaining games of the year. The ball was kicked 30 times and there were seven tries. This time around, it left the boot 62 times and there were two tries - neither of which scored by the home side.

But the Chiefs weren't the only ones concerned. Late in the first half, the Blues had Dalton Papalii sent to the sin bin for what looked to be a perfectly good turnover, then post-match skipper Patrick Tuipolotu could barely mask his confusion at the differences between that the decisions in that match and their win the week before against the Hurricanes.

"I wouldn't say there was any improvement," he said after a quick look at the ceiling to collect his thoughts.

'Picture' seems to be a new rugby buzzword for any type of game situation, so get used to it.

"There's no doubt the breakdown was refereed differently last week," he said.

Things got even more murky the next day in Wellington, when the Crusaders somehow managed to turn a 1-9 penalty deficit in the first half (with five in the Hurricanes' 22 and no yellow cards given out) to a 15-12 advantage by the end of the second.

The official line about the crackdown on offsides and ruck penalties, which has seen a staggering 108 blown in the first four games of Super Rugby, is that it will eventually lead to more space being created and more exciting play.

The logic behind that was somewhat tricky to understand, but New Zealand Rugby (NZR) referees boss Bryce Lawrence explained that if anything, the new interpretations were a simplification of an increasingly hard to police area of the game.

"The breakdown wasn't in a great place, we'd thought that for a couple of years. We had a chance with Covid to recalibrate," he said at NZR headquarters in Wellington.

Lawrence brought up an interesting point that flipped the notion that a lot of followers of the game often presume. While it seems that coaches and players catch up to existing laws and push the boundaries through greater fitness and gameplans, he says that "the game is constantly ahead of us [referees]".

"As soon as you go away from the laws [to free the game up], you end up having to go back to them," he said.

This is why we're finding ourselves getting used to the laws being actually applied, even though it means now virtually every ruck seems to be penalised.

It is a weird situation, that the game effectively needs to be broken every once in a while to hopefully regrow as something stronger.

The highly subjective nature of decision-making in rugby is also in stark contrast to the NRL, who effectively instituted a significant law change of their own over the lockdown that's been widely praised for doing exactly what was intended - speeding the game up.

This 'break it' phase is essentially where we find ourselves in now, maybe it's just because we haven't had any rugby for so long is why the amount of whistle is so jarring.

NZR opted to be the first country to adopt the World Rugby directive, which at least will mean the All Blacks will be far more adjusted to them if they ever actually get to play this season.

Lawrence admitted that while there wouldn't be any further major changes, the entire concept is a work in progress.

"We're reviewing every week. I wouldn't think it'd be changing, we just need to be better at it."