Richie Mo'unga was gifted a fortuitous try to ensure the Crusaders opened their Super Rugby Aotearoa campaign with a 39-25 victory over the Hurricanes in Wellington. 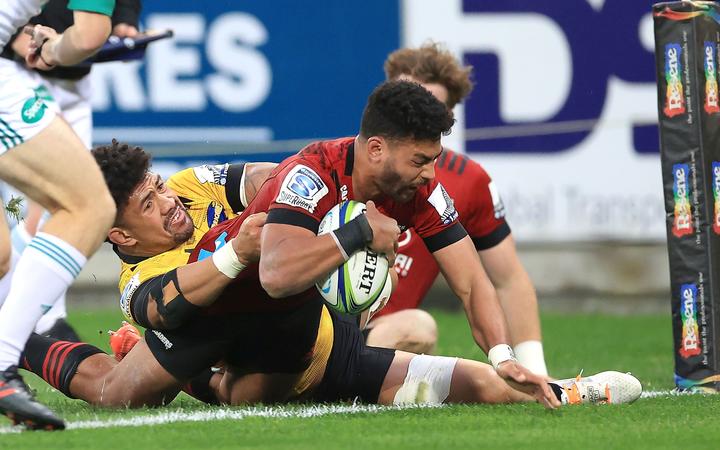 Mo'unga's 69th-minute try snapped a 25-25 deadlock and came when Hurricanes replacement Cobus Van Wyk mistakenly passed the ball to the Crusaders' Mitchell Drummond less than five metres from his own tryline.

The scrumhalf flicked the ball to Mo'unga, who scored the try and converted from the sideline to give his side some breathing room before David Havili crossed with less than five minutes remaining.

The Crusaders' first-half tries to Sevu Reece, Brayden Ennor and Jack Goodhue also came not from sustained pressure but by capitalising on Hurricanes' errors and sweeping down field.

The home side were kept in the match through the boot of flyhalf Jackson Garden-Bachop, who slotted five first-half penalties and a drop goal as the Crusaders fell foul of referee Brendon Pickerill.

That succession of penalties against the visitors continued in the second half and Pickerill sinbinned Jack Goodhue, which allowed the home side to narrow the gap to 19-18.

The Hurricanes failed to capitalise on the extra man advantage and Mo'unga kicked two penalties to extend the Crusaders' lead.

Hurricanes replacement hooker Asafo Aumua then finished off a superb team try to tie the score up at 25-25 and gave the home side's fans slim hopes of ending a five-game losing streak to the Crusaders.