World Cup mountain biker Sam Blenkinsop is one of many athletes whose season is up in the air due to Covid-19 and he's gutted after making a flying start to 2020. 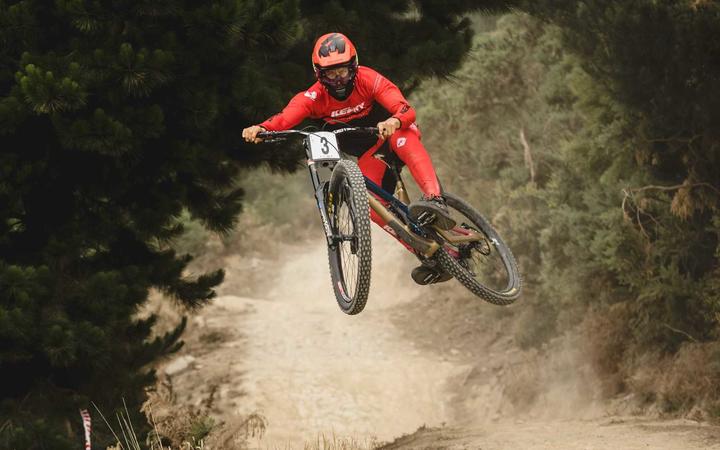 The 31-year-old won the National downhill championships for the first time in Dunedin in January, before strong performances at Crankworx Rotorua last month put him in title contention for the overall King of Crankworx crown.

However, the first three World Cup rounds in Slovenia, Croatia and Portugal have all been postponed or cancelled as has the Fort William round in Scotland and the Andorra race.

The second round of Crankworx in Austria has also been postponed.

"It's such a bummer because I was having such a good start to the season, winning Nationals for the first time and being third overall in the Crankworx standings after winning the Air DH in Rotorua, coming second in the Crankworx downhill and top five in the Enduro.

"It used to be that I would go to Nationals and not race or try not to win because the UCI teams and sponsors didn't want me to wear the full National Champion kit and top for the whole season, so for a few years I just didn't try to win it and the other times I did try I came second haha.

"Luckily things have changed as wearing your National Champs colours to World Cup events is sick, the jersey looks coll and it's awesome having the NZ flag on your arm. Hopefully we get some sort of season so I can run it."

Blenkinsop has no idea if he'll get the chance to don his national colours this year, with the World Championships set for September among the World Cup rounds.

"We don't really know what will happen with our World Cup and Crankworx season now, we won't be racing until September at the earliest, so it's like having a really long off-season.''

However, the truncated season could result in some big events coming down under.

"There's talk they might have World Cups in other countries that bid for the events but don't often hold them, like New Zealand or Australia. You run out of time in Europe (towards the end of the year), because it turns to snow.

"Everywhere we race in Europe are ski fields in the northern winter. Snow can hit those spots in October so then we can't use them.

"There's also talk we could do what Ski World Cups do and have two races in one weekend, or compressing the season to one month in one area of Europe, we just don't know. Maybe they'll just have the World Champs in Austria in September and then the World Cup final."

Originally from Whanganui, Blenkinsop is based near Christchurch's Port Hills with his wife, Alysha, and eight-month-old daughter, Indie.

He said his training hasn't been too affected, apart from the obvious.

"Most of the things I've been doing are the same, I've just been at home. I've got a gym set-up here and I've been working out and training with my wife and eight month old daughter and making it a family affair really.

"Been going on lots of walks and runs with the kid and been out on the road bike a lot. The only thing I haven't been doing is that technical downhill mountain biking because I don't want to risk it and be that stupid guy that's out and hurts himself and ends up in hospital because of it.

"I've been doing different things that I haven't tried before like yoga to try and give myself and edge when I do get back on the bike."

So far, Blenkinsop says he hasn't been hit financially by the Covid pandemic.

"I was just talking to my team (Norco) manager and there was no talk of a pay cut or anything. So Norco (main bike sponsor) have been really good. None of my other sponsors have said anything yet so fingers crossed.

"I know some of the other top riders are taking a percentage cut, but so far I'm OK. With the Covid stuff going on that could change though, there's no doubt.

"We can still do a lot of our social media stuff and interviews, the only thing we're missing is the racing and those promotional opportunities. You can't go filming on any hard tracks and stuff but my wife films me training day to day and different things to keep some content coming for the sponsors."

The lockdown is also giving the man the call "Blenki" more quality time with whanau.

"I've got an eight-month-old daughter so [lockdown] has been a blessing in disguise being able to spend so much time with her. Now I'm supposed to be in Canada testing and then at the third World Cup in Europe so I would have been away for over a month. Missing the racing is a bastard but I'm loving being at home and watching my daughter grow.

No racing sucks but all this home time with the family is so amazing. Happy Easter everyone stay safe. #happyeaster #familytime #loveit

"We're lucky we live in New Zealand and the lockdown isn't as intense as in Europe. My old team-mate and former World Champ Loic Bruni lives in France and he can't even go 1km from his house or he could be arrested and given up to a $5000 fine."

And he's not concerned by a potentially long spell off his downhill bike.

"Sometimes in the off-season I don't touch any of my mountain bikes for two months and then when I do get back on I'm almost better, haha. It's like muscle memory, the first few runs are a bit rusty but by the end of the day you're shredding as hard as you were at the end of last season.

"I actually do more motocross riding for training in the winter, it's the perfect time. I almost do more moto than MTB in the winter as it's the same kind of stuff but I can ride longer and it's harder on the body.

"I do a lot of moto in the woods on trails and you're going so fast that once you jump back on the mountain bike it feels almost slow so it really speeds you up and gets you comfortable with speed. It's also a lot harder to hold on to the motorbike so when you ride your downhill bike again it feels light and easy to throw around," he said.

Just how long it is before Blenkinsop can belt the four-stroke through the forest remains to be seen, with a decision on whether the level four lockdown will continue or be lifted to be made next week.