Black Caps captain Kane Williamson will miss the first two one dayers against India as he continues to battle a shoulder injury. 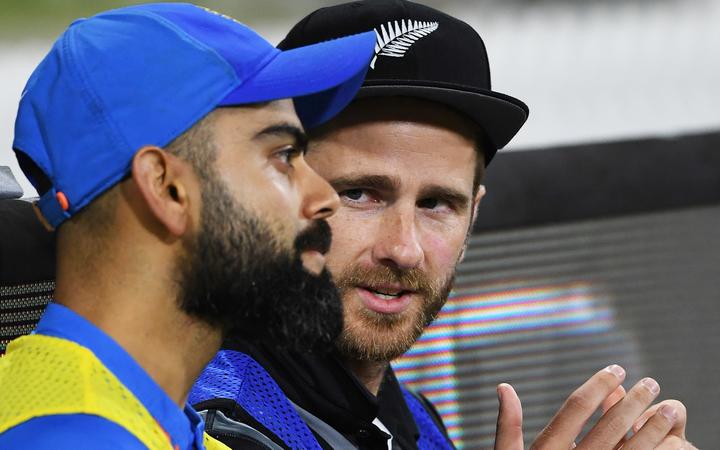 Kane Williamson and India skipper Virat Kohli talk on the side-lines during the fifth and final T20 against India in Mt Maunganui. Photo: Photosport

Williamson suffered the injury while fielding in the third T20 International in Hamilton last Wednesday and was unable to play in the final two games as New Zealand lost the series 5-nil.

Coach Gary Stead will also miss the series after it was revealed by the team that he is taking a pre-planned break. Bowling coach Shane Jurgensen will step in as head coach for the series.

The Black Caps are hoping to restore some pride when the two sides begin a three match one day series in Hamilton on Wednesday.

"Kane has had an X-ray scan which cleared him of anything serious, but it's best for his recovery that he avoids aggravating the joint for the next few days," Vallabh said.

"He will continue his fitness training sessions throughout the week and will start batting again on Friday with the prospect of being available for game three next Tuesday."

Hey coach! Shane Jurgensen in charge for the ODI series with Gary Stead taking a pre-planned break. Matt Horne helping out with some fielding while we are in Hamilton. #NZvsIND pic.twitter.com/iB4uISeqZC

"It's disappointing for Kane, but with so much important cricket still ahead this summer we must take a safety first approach," Larsen said.

"It's great to welcome Mark back into the one-day unit off the back of consecutive centuries for New Zealand A against a strong India A side.

"Mark's a versatile player who can cover multiple batting positions and his fielding is a real upshot to have in the squad."

With Williamson ruled out, Tom Latham will captain the side after last leading the ODI team against Bangladesh in Dunedin a year ago.