New Zealand have suffered a big defeat to Australia in the second cricket Test in Melbourne. 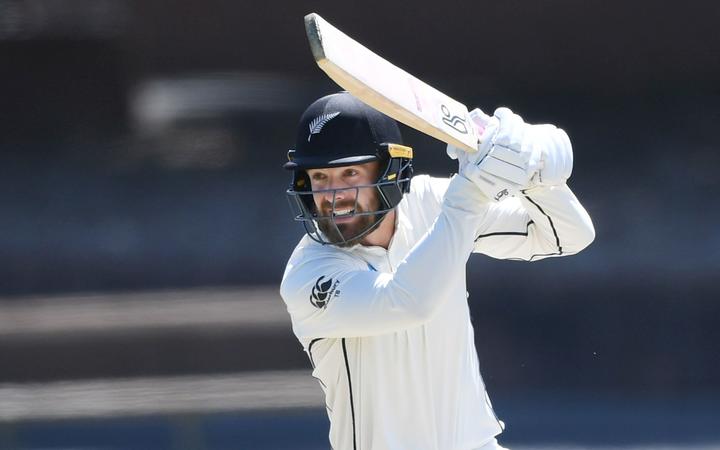 Despite an impressive century from makeshift Black Caps opener Tom Blundell - the home team have wrapped up a 247-run victory late on day four at the Melbourne Cricket Ground.

New Zealand were bowled out for 240 in their second innings, with Blundell the last man out for 121.

Nathan Lyon grabbed four wickets for Australia after a dominant display from the hosts both with bat and ball.

After setting an improbable 488-run victory target, Tim Paine's side bowled out the Black Caps for 240 on a balmy afternoon at the Melbourne Cricket Ground.

Australia's unbeaten run against their trans-Tasman neighbours has now stretched to 25 years, leaving a battered and bruised New Zealand playing only for pride in the third and final test in Sydney.

Having thrashed Kane Williamson's team by 296 runs in the day-night opener in Perth, Australia have claimed victory in four successive tests since retaining the Ashes in England.

Tom Blundell warmed New Zealand hearts with a stirring century that thwarted Australia's hopes of wrapping up a quicker victory.

But his batting partners crumbled around him and New Zealand ultimately bowed out meekly in the final hour.

Rocked by three wickets in nine deliveries from James Pattinson in the morning, New Zealand rallied to 131 for four at tea to the delight of Black Caps fans who sang with gusto in the terraces.

But Lyon broke the game open by capturing BJ Watling's wicket for 22, with a venomous delivery that turned sharply to catch an inside edge and fly straight to David Warner's safe hands at leg slip.

All-rounder Colin de Grandhomme was out for nine flicking Lyon straight to Warner at backward square leg, ending a short and uneasy innings on the 12th ball faced.

With tail-ender Trent Boult not batting due to a broken hand, a comical run out of Tim Southee left Australia needing only one wicket for victory.

Part-time legspinner Marnus Labuschagne wrapped it up by having Blundell out for 121, with Lyon taking a catch off the grass.

The result seals victory for Australia in the three-Test trans-Tamsn series, after their similarly dominant win in the first Test in Perth.

The third and final Test starts in Sydney on Friday.

Australia have ended their second innings on day three of the Boxing Day Test at the Melbourne Cricket Ground on 137/4, with a lead of 456.

A flurry of wickets late in the day saved what was a forgettable performance by the Black Caps on day three of the Boxing Day Test against Australia at the Melbourne Cricket Ground.

Starting the day on 44/2, New Zealand's troubles started straight away with Ross Taylor and Henry Nicholl's giving away their wickets on consecutive deliveries.

Next to go was BJ Watling, the wicketkeeper-batsman could only muster seven runs in his 17 ball stand.

Watling's end came from a pitch perfect delivery from James Pattinson that cramped the New Zealander up and found the edge of his bat, flying to Joe Burns at first slip.

All-rounder Colin de Grandhomme lasted a little longer than Watling, he's survived 33 balls, but like the Perth Test, he was undone by a Mitchell Starc short ball that was caught by David Warner. de Grandhomme finished on 11.

Mitchell Santner survived his own short ball scare from Starc early in his time at the crease, the Australians thought they had Santner out caught behind after the ball cannoned off his forearm back to slip. Replays showed a small noise coming as the ball passed Santner's sweatband on his gloves but the third umpire didn't think it was enough to overule the original not out decision.

In the end Santner only managed three runs off 32 deliveries, brought down by an edge to Tim Paine off the bowling of Pat Cummins. 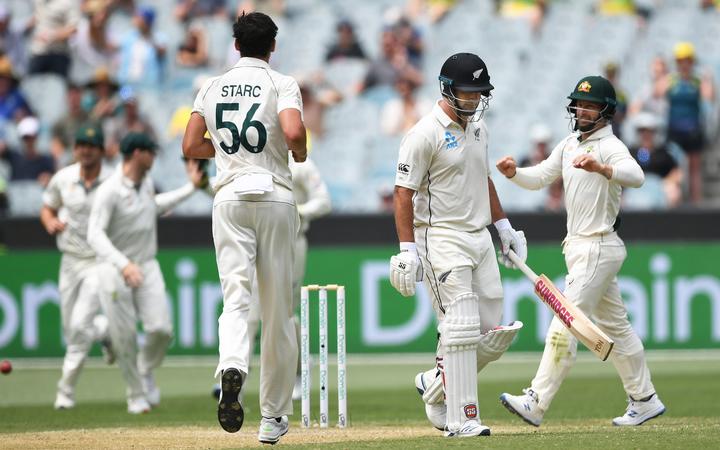 While his teammates crumbled around him, Black Caps opener Tom Latham quietly went about his business, slowly chipping away at the mammoth Australian total on the scoreboard.

Latham eventually reached 50, New Zealand's highest individiaul score of the innings, before he too edged one back to Paine off the bowling of Pat Cummins.

New Zealand's tail enders - Tim Southee, Trent Boult and Neil Wagner - all provided some entertainment for the crowds as the ducked and dove from Australia's quick bowlers, while also finding the boundary through a combination of luck and timing.

The three contributed 36 runs between them, a fifth of New Zealand's overall runs.

When Trent Boult lost his wicket, the final for New Zealand in their innings, the Black Caps conjured up just 148.

Pat Cummins was destroyer in chief for Australia, taking five wickets for just 28 runs, while his opening partner Mitchell Starc bagged four wickets of his own for 30 runs. 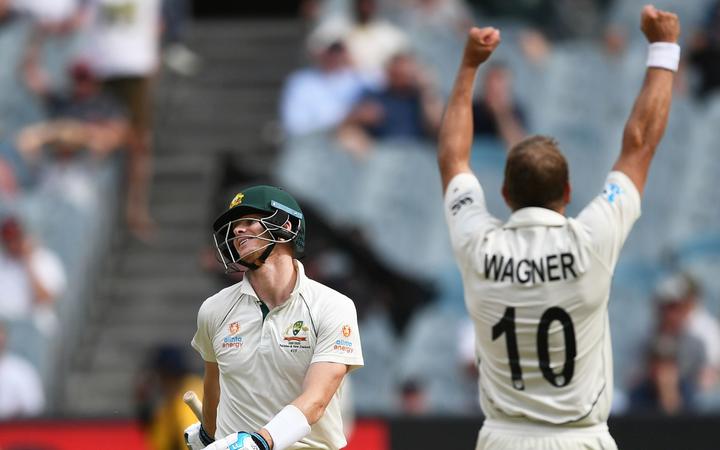 Australia then decided to come back out to bat, despite their comprehensive 319 run lead after the first innings.

At first, the decision appeared a wise one, before David Warner gave New Zealand fans something to crack a smile for when he played a slightly short of a length ball from Neil Wagner straight to Tom Blundell at cover. Warner was out on 38.

It took another 11 overs for New Zealand's next breakthrough, this time a runout at the expense of Australia's man of the summer Marnus Labuschagne. The Australia number three misread how close Tom Latham was at square leg and coming up short as he tried to sneak a single. He was out for 19.

Two overs later, Australian opener Joe Burns gave away his wicket, trying to feather a shot to cover off Mitchell Santner - he feathered one with his glove and BJ Watling took the catch.

The next over New Zealand had it's fourth and arguably most prized wicket - Steve Smith.

Smith, who has struggled against Neil Wagner's short pitched deliveries this series, was again undone by him, trying to guide a short one to backward of square leg. Standing waiting for it was Tim Southee who made no mistake. Smith departed on seven off 11 balls and Wagner had his 200th Test wicket in 46 matches, second only to Sir Richard Hadlee in achieving that milestone by a New Zealander.

The spree of wickets eventually ended and Australia's partnership of Matthew Wade and Travis Head settled in for the rest of the day, guiding the hosts to 137/4 at stumps on day three, with an overall lead of 456.

He's expected to require around four weeks of rehabilitation, with a replacement player to be confirmed in due course.

It was a long day in the field for the tourists who had to face the Australian fast bowlers in the final hour at the MCG in Melbourne.

New opener Tom Blundell made a bright start before he was caught behind off the bowling of Pat Cummins for 15.

Captain Kane Williamson was caught off James Pattinson for nine.

Tom Latham is unbeaten on nine and Ross Taylor is on two.

Taylor successfully reviewed after being given out lbw when he was on one.

Travis Head's second Test century was the backbone of the Australian innings.

Neil Wagner got through 38 overs and picked up four wickets 83 runs, while Tim Southee had figures of three for 103 off 33 overs. 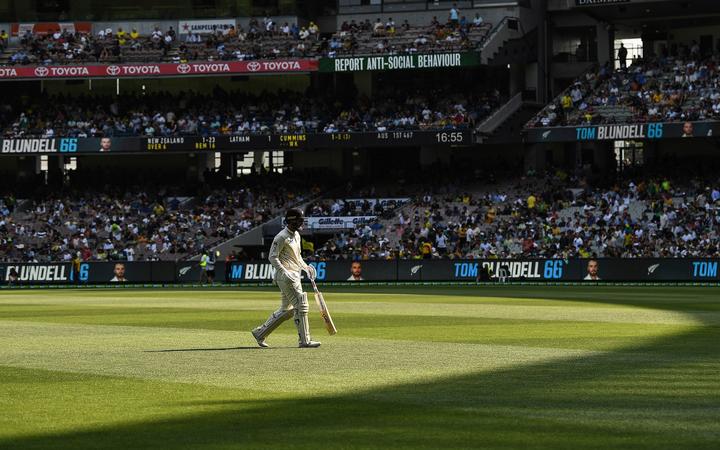 NZ opening batsman Tom Blundell heads back to the dressing room at the MCG. Photo: PHOTOSPORT

Australia took the honours on day one with the hosts finishing on 257/4.

New Zealand captain Kane Williamson won the toss and had immediate success with Trent Boult capturing the wicket of Joe Burns in the first over for a duck.

However, the rest of the Australian batsmen all had decent stints with David Warner making41 , Marnus Labuschange 63 and Matthew Wade 38.

Colin de Grandhomme has two wickets, while Boult and Neil Wagner have one each.

Steve Smith is unbeaten on 77 and Travis Head 25.

Almost 80,000 were in attendance, the biggest Boxing Day crowd at the MCG outside of an Ashes Test.

Australia won the first Test in Perth by 296 runs.

Who is playing: New Zealand and Australia

What is on the line: The trans-Tasman trophy (best of three series)

Weather conditions: Temperatures across the five days in Melbourne are expected to range from 24C to 36C (Saturday) with just a three percent chance of rain at the most, according to Accuweather.

The match will be broadcast live on Sky Sport channel 52.

RNZ will also have livescoring running on its website throughout the five days.

Australia drew first blood in the series with a convincing 296 run victory in Perth.

The Test, a day-nighter, started poorly for New Zealand when Australia won the toss and went into bat first.

Marnus Labuschagne, like has done so far this summer, toiled with New Zealand's bowlers as he went on to produce another century (143), helping his side to a first innings total of 416.

The Black Caps, meanwhile, were poor with the bat in the first innings, only reaching 166 - largely thanks to an 80 from Ross Taylor.

It was strike bowler Mitchell Starc who did the most damage for the hosts, taking 5/52 off 18 overs.

With a healthy lead already, Australia declared in the side's second innings on 217/9 with half centuries to Travis Head and Labuschagne.

Chasing a record 468 for victory, New Zealand again struggled with the bat.

BJ Watling top scored with 40 while Colin de Grandhomme made 33. Starc was Australia's main weapon with the ball taking four wickets, as did spinner Nathan Lyon. 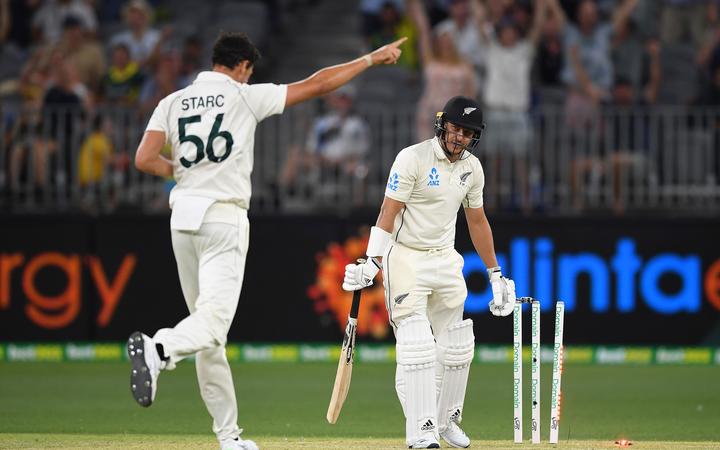 Changes for the Boxing Day Test

The hiding forced the Black Caps selectors to make some changes heading into Melbourne.

Scoring just one and one in the two innings in Perth, Black Caps opener Jeet Raval has been given the axe in favour of Wellington wicket-keeper batsman Tom Blundell.

Blundell has only played two Tests, scoring a century on debut against the West Indies at his home ground - the Basin Reserve.

Black Caps seamer Trent Boult also comes back into the attack after missing the first Test with injury, he'll replace Lockie Ferguson who injured his calf in the Perth match.