The Melbourne Cup's runner up jockey, New Zealander Michael Walker, says he regrets his excessive whipping of Prince of Arran. 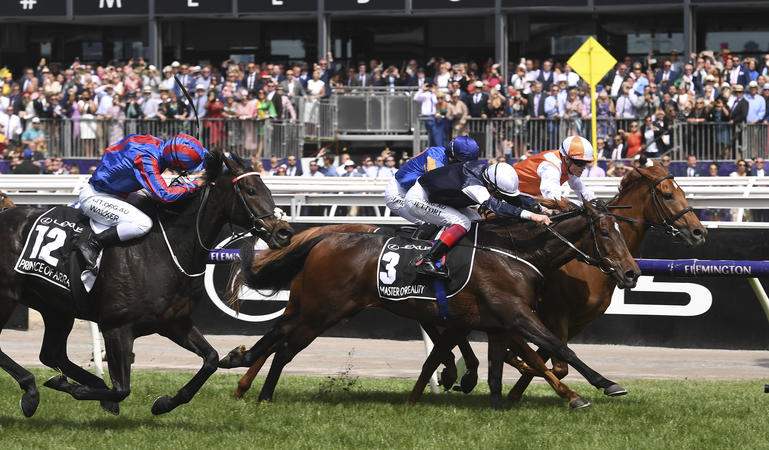 Jockey Craig Williams onboard Vow and Declare, followed by Frankie Dettori on Master of Reality and and at the far left, Michael Walker on Prince of Arran. Photo: William West / AFP

The Melbourne Cup was taken out by the first Australian horse in a decade, Vow and Declare.

After the race, Walker was fined $10,000 and banned for seven races for excessive whipping on Prince of Arran, using it 12 times before the 100m mark.

Racing Victoria's rules state the rider may not use his whip on more than five occasions prior to the 100m, and not in consecutive strides, but after the 100m a rider may use his whip at his own discretion.

Walker told Morning Report it was unfortunate he didn't win, but he was happy with his run.

"[It] may be one of those races that eludes me but I'm not going to give up until I get one.

Walker said the reason the race was tight was because the pace setters were going at such a slow pace that the pack was able to conserve energy for the finish.

"I actually had one of the [Danny] O'Brien horses outside me and I was honing the jockey, 'Mate, go forward' ... All in all, I was happy with the run I had, but unfortunately I couldn't get the result for New Zealand."

He said he "most definitely" regretted what happened with the excessive whipping.

"We have, here in Australia and around the world, rules put into place to rectify that stuff or stop it. But what people don't realise is that the sticks we use these days - the whips - are designed for noise, not for pain.

"I could bend over right now and let you hit me as hard as you want with those sticks and they don't hurt."

Last year, six jockeys were fined a total of $7700 for using the whip excessively - three of which came in the top three places. A day before the races this year, Racing Victoria sent out a message to remind jockeys that anyone who breached the whip rules would face severe punishment.

Walker told Morning Report he was spurred on by his ambition to win the Cup.

"You can imagine the emotion and feeling inside me, I just thought I was going to win my first Melbourne Cup, so everything just goes out the window.

"I was trying to win a Melbourne Cup, so you know, definitely regret it, but just want to let people know that we are not out there to hurt horses, you see a lot of trainers and staff look after their horses better than humans get looked after."

Trainers already did so much to take care of the horses, he said. In response to general protests against the sport for animal cruelty, Walker said thoroughbred horses were bred to race.

"Since I got off the racecourse last night, I've had abusive messages towards me through text, through messenger, through emails, I read a few of them and naturally I get my back up and I want to say something, but I don't.

Another area that has drawn criticism in the public arena is the injuries that horses sustain on the tracks which can prove fatal. Last year, Irish horse The Cliffsofmoher was euthanised after breaking its shoulder during the Melbourne Cup.

Walker said the horses were trained to be athletes and just like with any sport, injuries were bound to happen.

"That happens but that's all part of sport and being in sport. A lot of humans get injured. I've had my fair share of injuries, it's just the way it rolls."

There were also future options for horses after they finish racing, Walker said.

"Victoria is really strong about that, they have a programme called Off The Track, so a lot of those horses that go off the track go to do dressage, and a lot of them end up in Olympics doing all that dressage and those show jumping things.

"I know a lot of mates that have horses that they've ridden as a jockey and now they've taken those horses home when they've finished racing, and treat them like their household pet. There's always something after racing for a thoroughbred."