Before the All Blacks take on Ireland in the Rugby World Cup quarterfinals, RNZ has broken down some of the numbers behind the the two teams. 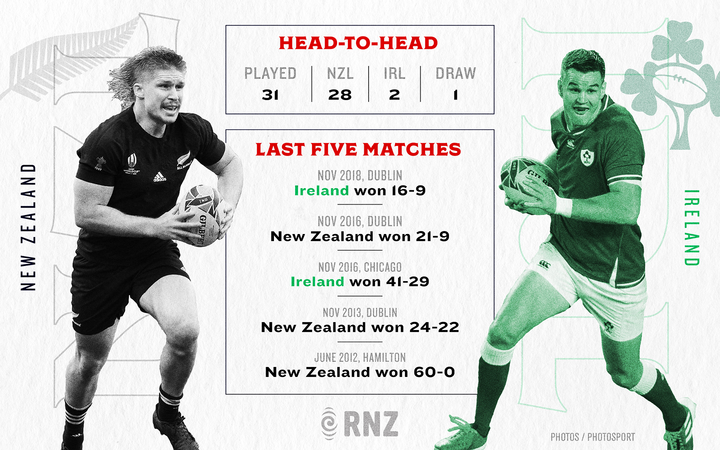 All Blacks vs Ireland by the numbers. Photo: Photosport / Suneil Narsai

Looking back through the history books, New Zealand and Ireland have faced each other 31 times.

It took Ireland 30 years just to score a point against New Zealand, doing so in 1935 in their 17-9 loss to the All Blacks at Lansdowne Road. 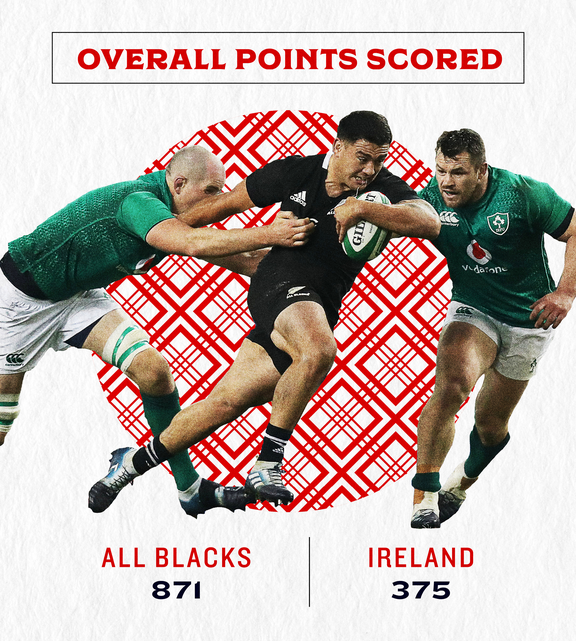 All Blacks vs Ireland by the numbers. Graphic: Photosport / Suneil Narsai

For those with more recent memories, Ireland's two wins against the All Blacks came in 2016 in Chicago and 2018 in Dublin.

Chicago, of course, is the one best remembered - for the first time in their 111 years of encounters, the Irish beat the All Blacks, and beat them well, winning 40-29 at Soldier Field.

The scenes from after the final whistle will long be remembered by both New Zealand and Irish fans.

In 2018, this time on home turf, the Irish got the better of New Zealand for the second time, winning 16-9 in front of a raucous Dublin crowd.

As most will know, both those wins for Ireland came while a New Zealander was, and still is, the head coach - Palmerston North's own Joe Schmidt.

In total, the All Blacks have come out on top in 28 of the 31 encounters, Ireland two, and drawn once.

The most points the All Blacks have ever put on Ireland was 66 in their 66-28 win at Yarrow Stadium in New Plymouth in 2010. 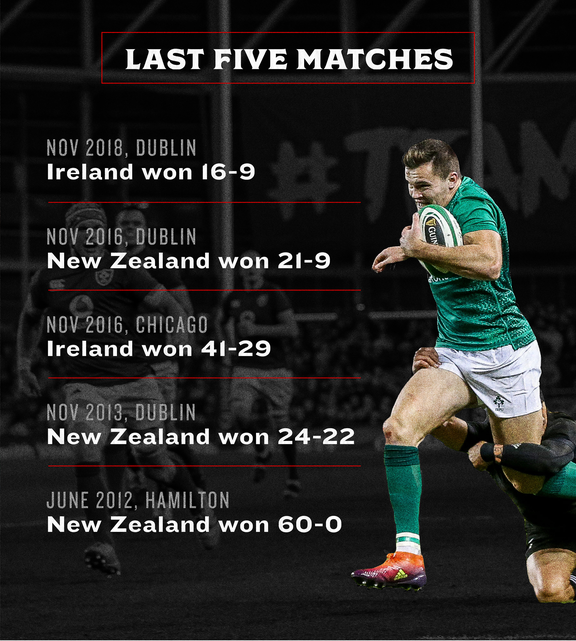 All Blacks vs Ireland by the numbers. Photo: Photosport / Suneil Narsai

The biggest winning margin was 60 when the All Blacks kept Ireland scoreless at Waikato Stadium in 2012.

Ireland's biggest winning margin was of course the Chicago victory (40-29) which is also the most points they've ever scored against New Zealand.

New Zealand holds the upper hand when it comes to total points scored, scoring 871 to Ireland's 375 but Ireland have won two of the last three encounters since 2016.

And when it comes to neutral venues like Tokyo Stadium will be, both teams have won one each - Ireland's came in Chicago in 2016 and New Zealand's came in the 1995 Rugby World Cup at Ellis Park Johannesburg.

Looking at this World Cup, Ireland famously lost to Japan in Group A to finish second in their pool while New Zealand went unbeaten (including the cancellation of their match against Italy) to finish top of Group B.

So that begs the question - who will win tonight?