Opinion - Are the All Blacks going to win the Rugby World Cup? The honest answer is probably.

The All Blacks take on Ireland in the Rugby World Cup quarterfinals on Saturday. Photo: PhotoSport

Sure we've reached the knockout phase and, yes, Ireland have beaten New Zealand semi-regularly of late, but there's really not a lot to fear from this weekend's quarterfinal.

England in a semifinal would be interesting, partly because of how infrequently the All Blacks have met them in recent times, and then we're assuming it'll be South Africa in the final.

We all have great respect for the Springboks, but the All Blacks handled them pretty comfortably in pool play and probably would do again in a final, particularly if Handre Pollard plays that poorly again.

Is that all a bit presumptuous or arrogant? Maybe, but let's not allow false modesty or a desire to generate website traffic turn Saturday's quarterfinal into a white-knuckle ride.

All Blacks coach Steve Hansen has named a formidable side, for the clash at Tokyo Stadium. I'd have configured the midfield and loose forwards a little differently, but there really isn't a lot to quibble about.

I'm still not entirely sold on centre Jack Goodhue. He was conferred with Golden Boy status before he'd even played a Test match and while he's still a fine player, I'm not sure he's quite lived up to the billing.

Anton Lienert-Brown would instead play centre for me. As it stands, the Chiefs' midfield back will be at second five-eighth, with Sonny Bill Williams the bloke on the bench.

The Williams bit I get. It was easy to be a Sonny Bill sceptic over the last couple of seasons, given how infrequently he actually played, but his form in Japan has been good and he's worth his spot this week.

But with Lienert-Brown my preferred centre, then Ryan Crotty would've been his midfield partner. There's a solidity Crotty provides which brings a degree of comfort and if he's not a first-choice option for these knockout games, then why is he in Japan?

As cover? I suppose so. But you don't look around this All Blacks squad and see too many worst-case-scenario specialists. You're either a dynamic, starting option, or you're back here playing Mitre 10 Cup.

On that basis, Ngani Laumape must wonder why he's stuck playing for Manawatu. Is he the complete and accomplished footballer that Crotty is? No. But if Crotty's merely a reliable spare part over there, then why not give yourself the option of Laumape's game-breaking ability instead? 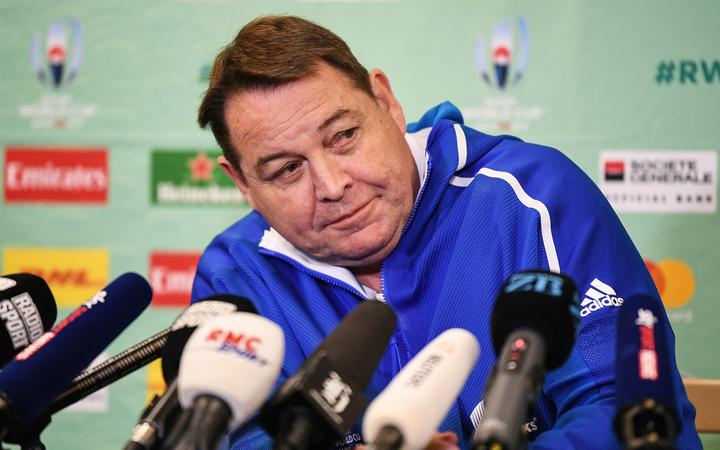 Has Steve Hansen made the right calls with his team naming? Photo: PHOTOSPORT

Speaking of spare parts, the absence of Ben Smith and Rieko Ioane is telling. Not shocking, mind you, but telling just the same.

People can huff and puff all they like on Ioane's behalf, but his career's gone badly awry. Whether that's his fault or the coach's or just down to luck or circumstances is hard to know, but he's fallen pretty far, pretty quickly.

Smith's been a really good and admirable All Black, but at this point in his career he's not the bloke you want providing impact off the bench. Jordie Barrett proved, albeit only against Namibia, that he's not a liability and is therefore worthy of his selection ahead of Smith.

Again, though, there's a touch of the Crottys where Smith is concerned. If he's not good enough to start, then why's he there?

There's a lot to be said for off-field leadership and wise counsel but when that's a player's major strength, then he ought to be on the coaching - not playing - staff.

Who knows? Maybe Smith, Ioane and Crotty will all have big on-field parts to play in winning this tournament? We'll see.

Scott Barrett's the guy who's been unluckiest here. He's among the top handful of players we have in this country, but will bide his time on the bench this Saturday.

That's fair, from a locking perspective. You have to pick Sam Whitelock and Brodie Retallick there and no-one would argue otherwise.

However, you might suggest Barrett's a bit stiff not to be playing blindside flanker.

Should Ardie Savea be wearing the number 6, 7 or 8 jersey? Photo: Photosport

This is captain Kieran Read's valedictory tour and he'll play in the No.8 jumper come hell or high water. Sure, he might perform more of a blindside's role at times, but there appears a point of principle about retaining the 8 on his back.

Number eight, of course, is Ardie Savea's best position. Easily the most dynamic of New Zealand's loose forwards, Savea plays a lot of his rugby in the 7 jumper but can only find at place in the All Blacks at blindside flanker.

Look, the guy's so good he can play anywhere, but this is still an odd situation. One that appears designed to protect the reputation of Read and, to a lesser extent, openside flanker Sam Cane.

Spend any time around the All Blacks, even if it's just sitting and watching press conferences, and few players will impress you quite like Cane. He seems a genuinely special guy, whose on-field bravery will never be in question.

But, if Read's going to play 8, then there's a case to be made for Savea at 7 and Barrett as the No.6. You assume that's the way the team will finish Saturday's game, at any rate.

These really are only quibbles, though. This is a good All Blacks team, one good enough to kick on and win this tournament now.

Sudden death does funny things, as we know. A succession of New Zealand teams found ways to go home early, until the triumph of 2011.

But there's really not a lot for New Zealand to fear at this tournament. They have the skill and athleticism to beat everyone who's still here, starting with Ireland by 10 or 15 points on Saturday.