We know you're busy so we've been reading all the headlines at the Rugby World Cup, so you don't have to. 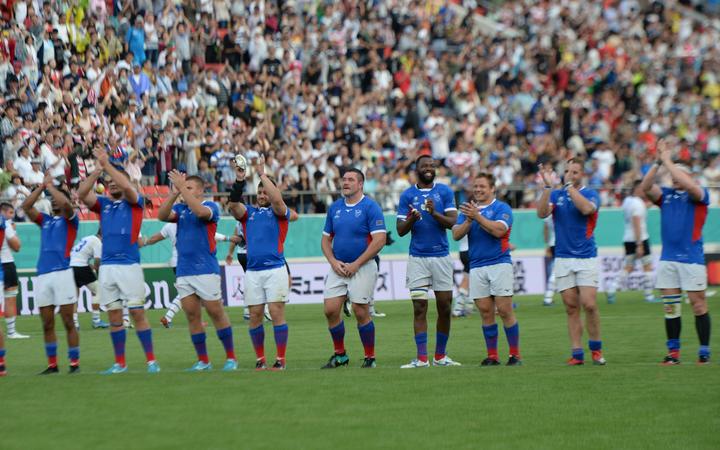 Players of Namibia applaud the fans after their World Cup pool B match with Italy where they were beaten 47-22. Photo: Photosport

Today, it's all Namibia, Italy and the Crusaders. Yes, the Super Rugby team. They may not be at the Rugby World Cup in Japan but their presence is certainly being felt.

The Guardian says that the club, which won its third consecutive Super Rugby title by beating the Jaguares, earlier this year has no fewer than 24 players, past or present, in Japan.

"Winners of Super Rugby for the 10th time in the competitions 24-season history earlier this year, the Crusaders have current or former players representing Tonga (four players), Samoa (four), Fiji (one), Scotland (one) and England (one) at this World Cup. They sit alongside the 13 current or former representatives who are on the All Blacks team bus in Japan."

McIlraith, who used to work in media for the Crusaders, points out that "while the overall representation is remarkable by World Cup standards, it is probably not all that surprising given that of the 237 players who have worn the Crusaders jersey since the club was formed, 45 percent have also played Test rugby. As well as the 72 who have featured for the All Blacks, the Crusaders have supplied internationals to 10 other countries, three of whom were also British & Irish Lions."

That is a record that will be hard to beat.

Mind you, the Italians may have their own record; their games are being watched from space.

European Space Agency astronaut Luca Pamitano has taken over command of the International Space Station some 408 kilometres above Japan but he is also a passionate fan of Italian rugby.

So World Rugby has organised a feed for Parmitano to watch Italy take on the Springboks tonight.

He says "rugby is a fantastic game that celebrates friendship and teamwork" similar to that needed to run a Space Station.

Also in action this weekend is Namibia. Surely everyone in the world is a fan of Namibian rugby.

First the team, known as the Welwitschias, have been charming, humble and happy just to take the field against the All Blacks on Sunday, with little expectation of a win.

"It's a very proud moment for us as Namibians are getting to compete against the best players in the world."

"It's obviously not the teams we would want to play against to achieve our first win … you just get excited as a player. You contest yourself against these players, you compete against them, and you're on the same pitch as these guys that you watch on Super Rugby level every weekend."

Plus Namibia gave us one of the greatest Springboks, the great Jan Ellis from the 1970s.

But then there are their memories of scoring a try against the All Blacks in the 2015 Rugby World Cup in the Olympic Stadium in London. Johan Deysel crashed over in the second half much to the delight of the crowd and the fans back home. Just as delightful is the recent revelation that Deysel's nickname is "Buffy" because "he slayed people on the pitch".

And to top things off there are the ringing comments of the President of Namibia Hage Geingob, when he farewelled the team to the World Cup. How is this for a farewell speech to the boys - far better than a handshake and a good luck.

"We are a small country, but we are brave people and we will compete with the best against New Zealand, South Africa and Italy.

"Why do they always put us against the best - it's because they are afraid that we will go through to the next round so they want to demoralise us," he joked.

"We will be praying for your health and safety in the matches, but also for victory. If you are defeated it's not the end of the world - you are putting your country on the map and exposing our young boys to the world.

"You qualified and beat all the teams in Africa - you are big in Africa and now you are going with the best, South Africa, to represent the continent.

"We will be watching you, so show them and make us proud as our ambassadors. Even if you lose people must say, hey, but Namibia fought well." 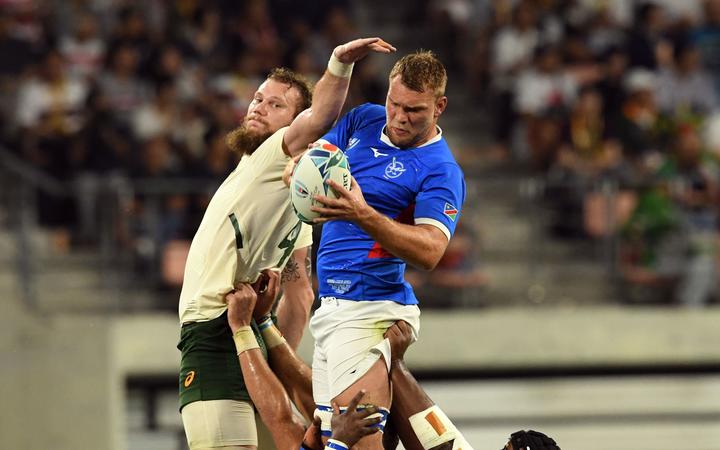 Players of South Africa and Namibia battle for the ball in a line-out. Photo: PHOTOSPORT

Perhaps the best - certainly most compelling - coverage of the Welwitschias is the reporter who headed to Reheboth, population 28,843, to watch the Namibians take on the Springboks. (They lost 57-3.)

John Goliath wrote this: "In the past, Rehoboth had a bit of a reputation of treating incomers with, well, some hostility, especially guys from Windhoek trying to date the women in the town. There are only about 50,000 people living there, so I would also want to make sure that outsiders don't come in and take the women.

"I walk into this pub in this one-horse town and I stand out like a sore thumb. Because my mother hails from the Northern Cape, I kinda look like the people here. But the people of Rehoboth's complexion is darker than mine, because of the sun, which was already at about 34 degrees in September.

"But it's not a lovely tan, but the sort of complexion you get after spending time with the cattle in the fields, which are extremely barren because of a drought that is busy crippling the southern and central regions of Namibia."

And it gets better from there.

Good luck to the Namibians.