Ireland began to put their World Cup back on track after the shock loss to Japan but it took them over an hour to secure a bonus point and strengthen their quarter-final chances in an unconvincing 35-0 win over a stubborn Russia. 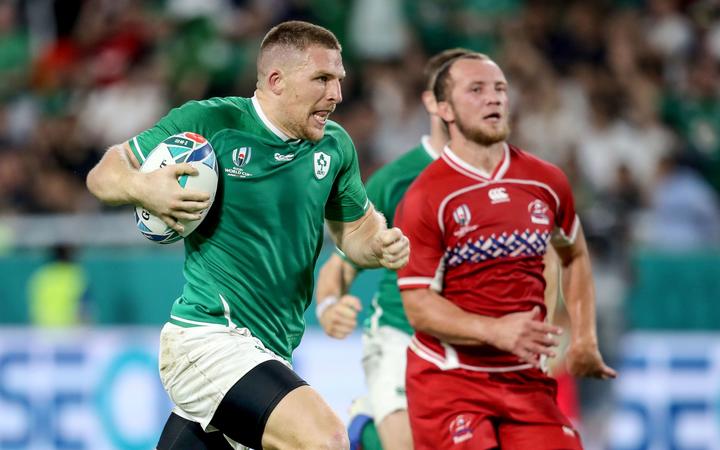 Ireland just need to beat Samoa to reach the last eight and can finish top of the pool if Japan slip up but the fact Joe Schmidt's side struggled to put away such a limited team will do little for fans' waning hopes of reaching a first semi-final.

"We are delighted to get a good win and get back on the horse after last week. To pick up the bonus point was exactly what we were looking for tonight and to keep them to zero," Ireland captain Johnny Sexton said in a pitchside interview.

"They're a very well organised team and they made it tough for us at times. The conditions were very difficult and the ball was very slippery so pleased to get the five points but still lots to work on."

Only a commanding win would have sufficed with the shock in Shizuoka still reverberating around the tournament and it looked on the cards when Rob Kearney, who scored in the 62-12 trashing of Russia in the 2011 World Cup, touched down after 90 seconds.

Sexton, who was not risked against Japan due to a thigh injury, appeared to have Ireland rushing towards the bonus point when his textbook 13th-minute dink through was carried over by flanker Peter O'Mahony for just his second try in 62 tests.

Yet Russia, who belied their lowly standing by giving Japan a fright and were mainly outdone by a short turnaround against Samoa, remained competitive with Ramil Gaisin's smart kicking helping to keep Ireland at bay for another 20 minutes.

While some basic errors cost the world's 20th-ranked side early on, Ireland could only manage a solitary Rhys Ruddock try when Bogdan Fedotko and Andrey Ostrikov were yellow carded either side of halftime for The Bears.

Sexton, captaining his country for the first time, kicked flawlessly before being replaced at halftime and Ireland's focus left with him in an error-strewn second half in which the Russian pack bossed the far more experienced opposing eight.

Though cooler in the stadium than when Samoa and Scotland struggled to hold onto the ball on Monday, the greasy surface played a part in Ireland's scrappiness before Andrew Conway was put through for his second try of the tournament on 62 minutes.

Centre Garry Ringrose added his second try in as many games to give the scoreline a less flattering look than the Russians' efforts deserved but for Ireland, it could not gloss over other columns like the 23 turnovers they conceded to Russia's 14.

"We are delighted with our performance, we came here to make it really hard for Ireland to score the four tries. I'm so proud of the players, they gave absolutely everything," Russia coach Lyn Jones said.

"We played for 60 minutes there without conceding a try. That is quite a performance for us I can tell you. I'm delighted. It's a big day for Russian rugby."

The win puts Ireland on 11 points, while unbeaten Japan (nine) face Samoa (five) on Saturday. Scotland also have five points and play Russia next Wednesday in Shizuoka before ending the pool phase against the tournament hosts in Yokohama on Oct. 13.