After a long ten day wait between games it's finally the day for the All Blacks second pool match at the Rugby World Cup, with the New Zealanders taking on Canada in Oita. 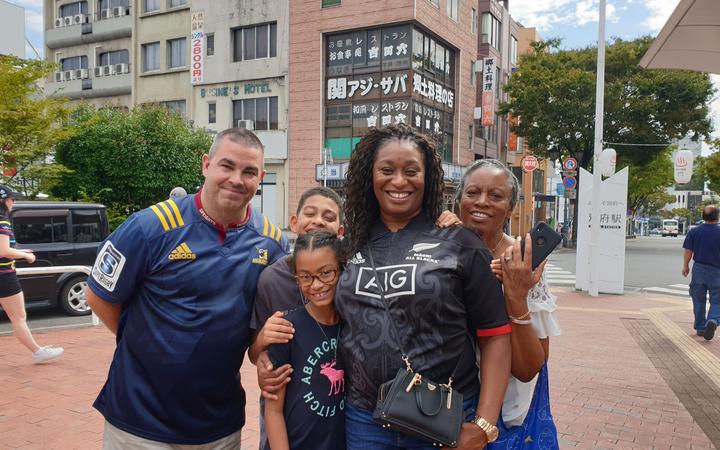 All Blacks fans in Beppu ahead of the clash with Canada. Photo: RNZ / Joe Porter

Fans of both teams have flocked into the area overnight and into neighbouring city Beppu.

RNZ took to the streets this morning to gauge the feeling among supporters ahead of the match.

Cam, Simon and Regan are part of the Kiwi invasion of Beppu and Oita, with All Blacks jerseys thick on the ground.

They think it will be great to see the All Blacks back in action, testing combinations and working hard with an eye to the quarter-finals.

They had been to see a recent Canada-USA game; "it left a lot to be desired". But they rate the Canadians for their passion.

Sporting All Black gear were Hiroshi and Tomo. They are pumped for the game and their first All Black experience.

"We are looking forward to seeing the haka. It's our first time to see the haka and the All Blacks. Go All Blacks!" 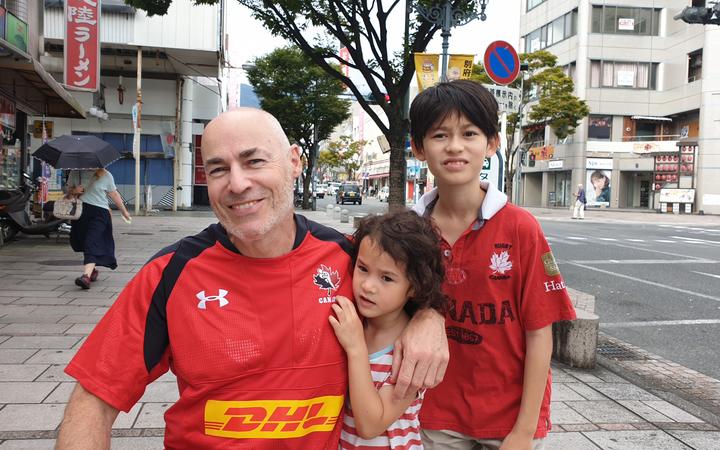 A Canadian father and son group, Mel and Jonny, are predicting a whitewash.

"I think it will be enertaining for a time. Then it won't be as entertaining for some people. Maybe we will get to see some good defence from the Canadians."

Can the Canadians win?

They gave one score prediction; 67-3 to the All Blacks.

Kiwis Damon and Michael, of Ngāi Tāmanuhiri Muriwai, are here for much more sombre reasons, fulfilling a dream for their father, Tawehi. He was diagnosed with a disease which affects the nerves which help people move, speak, swallow and breathe.

"Recently my Dad was diagnosed with motor neurones,' said Damon. "There is a time frame with that. But he had a bucket list so within three weeks we had booked hotels and tickets and flights and we are here.

"We have caught up with a few Canadian fans and they are expecting a big score. But I said anything can happen."

While Damon was willing to give the Canadians a chance, their own fans aren't so sure, including Aussie Luke and Canadian Karen.

"I am expecting a bloodbath," says Luke.

Karen is hoping Canada can score at least one try. "We can bring good energy, that's all we can bring."