Following the All Blacks around Japan at the Rugby World Cup is proving trickier than first thought for two of the team's biggest fans. 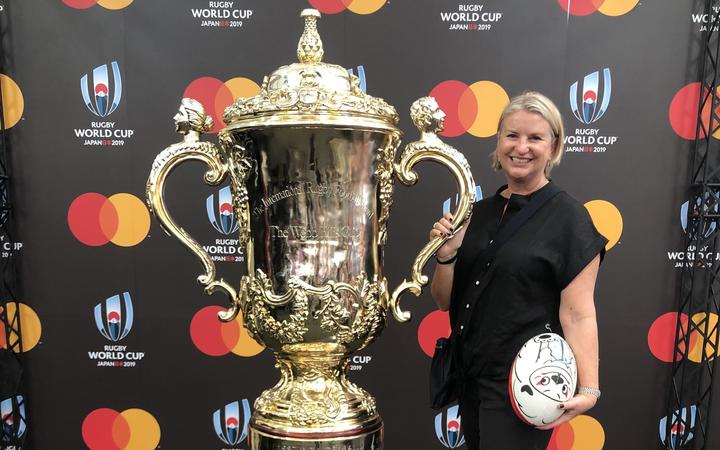 Aucklander Kate Lawless and her husband Robin have made the 8,800km trip to Japan in the hope of watching the All Blacks lift the Webb Ellis trophy for the third successive time.

With their daughter now at university and Robin retired, the couple found themselves with enough extra money to get tickets to every All Blacks match as well as a quarterfinal, semifinal, the third place playoff and the final.

Kate told First Up it's the trip of a lifetime.

"We are going via plane, train and automobile, we have a very thick envelope of tickets and quite a complicated itinerary.

"We've already had a few problems with the trains, but we're just so happy to be here it doesn't really matter."

The couple have been staying in Tokyo and travelled to nearby Yokohama by train for the All Blacks' first match against South Africa on Saturday.

"We allowed ourselves two hours to get out to the stadium and we got there with 10 minutes to spare.

"We were absolutely stressing out and as we went down to our seat a South African supporter handed us over two beers which we desperately needed [which] I thought was very sporting.

"We got to our seats, we were about the last ones to arrive, and we were sitting amongst a lot of Kiwi supporters and to our left was a huge block of South African supporters. [It was] a wonderful atmosphere, the Japanese were really getting into it and I'm pleased to say that I didn't see a single Japanese [fan] that wasn't supporting New Zealand so that was really encouraging."

Kate and Robin haven't been afraid to don their All Blacks supporters gear whilst out sightseeing, and they've been surprised by the reaction by the locals.

"Random people will come up to us and say 'All Black, All Black' even though they're more baseball supporters here.

"When we were going to the game last night and we had to change trains at Yokohama Train Station, we were looking a bit lost and Japanese couple came up to us and said 'are you going to the stadium? We can help you because we're going as well so we'll show you the way' and I said 'who are you supporting?' and they said 'All Blacks'.

"I don't understand why they're so enthusiastic because I don't think I'd be like that if I was going to watch a Japanese team play baseball... but it's really great that they are."

On top of the World Cup, the couple are excited to try the local Japanese cuisine, though they have discovered it's not good to go to the games on an empty stomach.

"The terrible thing about the stadiums is that they sell out of food before half time so unless you have a substantial lunch you're pretty much starving by the time you get back to your hotel.

"So we've been eating at about 11pm and we go to these little yakatori bars where they just squeeze in about 10 people, there's no room to move, and they have these little barbecue grills going and you just choose stuff off the menu and they grill it in front of you and they really encourage you to drink beer so I think they probably make their money from the alcohol, not from the food - there's no hard time drinking the beer!"