At the opening match of the Rugby World Cup families wore wide smiles and matching outfits while mates cheered together, banking memories they'll be able to call on for years to come. 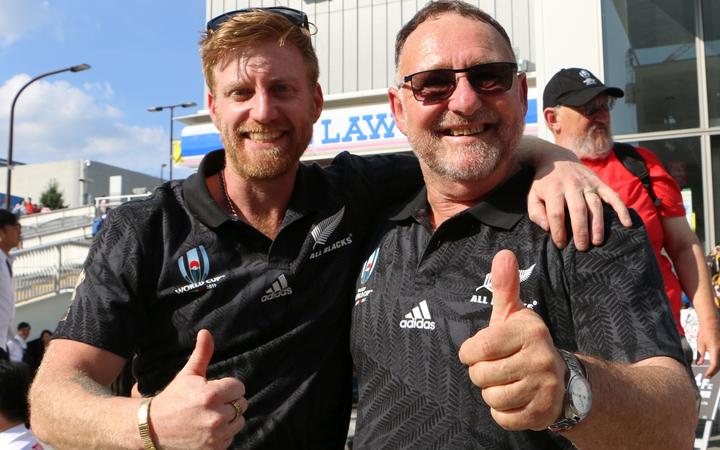 Wayne and Richard Gaby from Timaru get into the spirit of the Rugby World Cup in Tokyo. Photo: RNZ / Leilani Momoisea

Friends and strangers occupied the same space, chanting in unison, going through the highs and lows of the game together. For many, it is that shared experience that makes sports so special. It can be a vehicle for their love, their friendship, their kinship.

Wayne Gaby and his son Richard had made their way to Japan from Timaru, and took a drinks break on the steps of a mart just outside Tokyo Stadium. They had been planning this trip for five years.

"My late wife was also going to come as well, but unfortunately she died two and a half years ago, so that buggered it up a wee bit. We're here in her honour."

He had done a lot of touring with his wife, Kay, and this was supposed to be another one together, but he laughs when asked if his wife would have loved this trip. "Not really. In all honesty she wasn't really into rugby, but I said look, it's not about the rugby it's about the people, and just being here."

"It's a once in a lifetime opportunity to do it with Dad," says Richard, "And in Japan as well. How amazing is that? I'll never forget it."

For Ffion Griffin-Blair, a mutual love of the atmosphere from the 2011 Rugby World Cup in New Zealand has morphed into what looks to now be a family tradition.

They were also at the 2015 World Cup in England and now her husband Todd, parents Robert and Laura Davis and brother Jamie are in Japan for their third World Cup together. New Zealand and England are home for them, so Japan is a completely new and different experience they get to share. 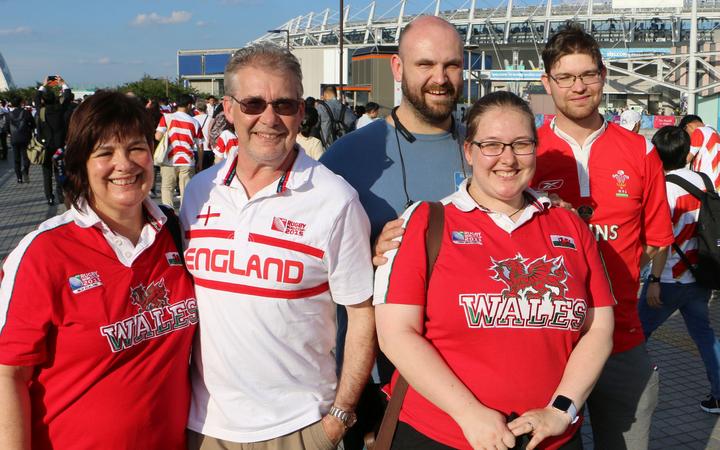 There is a fun family rivalry over who they support, with Robert left on his own to cheer for England, while the rest support Wales. His son Jamie has even threatened to wear an Argentina jersey, rather than support England when the two teams clash.

For many at the game last night, it must have been their first Rugby World Cup experience, and perhaps for some, the beginnings of a new family tradition. 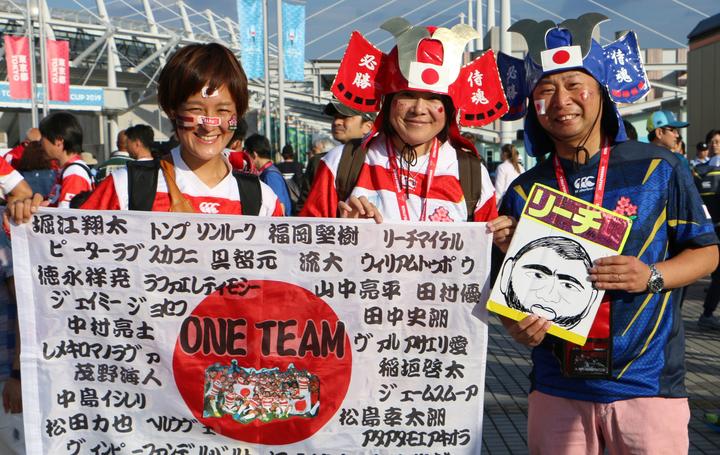