Scott Barrett returns at lock and Ardie Savea starts at blindside, while Richie Mo'unga and Beauden Barrett retain their dual playmakers role for the All Blacks opening Bledisloe Cup test in Perth. 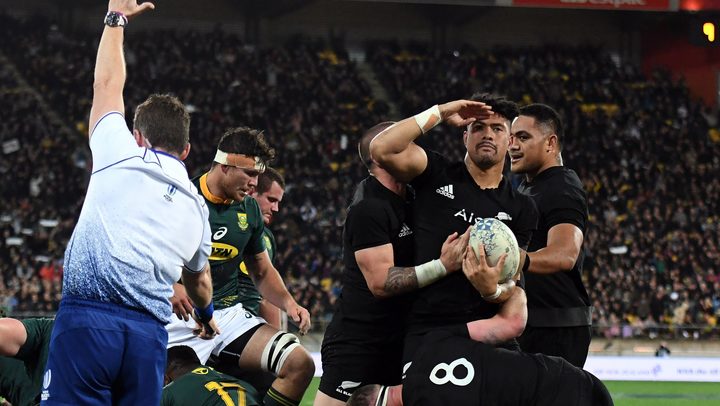 Savea makes his first start at blindside flanker, with captain Kieran Read at number eight and Sam Cane at openside.

Coach Steve Hansen seems to have had a change of heart about playing loose forward Savea at number six.

Hansen has said previously he doesn't believe Savea has the bulk to play at blindside but has opted to play him there rather than moving skipper Kieran Read to the side of the scrum and bringing Savea in at number eight.

Scott Barrett comes straight back into the starting lineup after missing the first two rugby championship tests against Argentina and South Africa through injury.

He's a straight swap for Brodie Retallick, who is out after dislocating his shoulder in the side's last outing - the draw against the Springboks.

Hansen has again decided to start his two playmakers, with Mo'unga playing at first five and Beauden Barrett staying at fullback.

The defending champions have picked Dane Coles at hooker in place of Codie Taylor, who drops to the bench.

It's arguably the All Blacks strongest possible side, with Anton Leinert-Brown and Jack Goodhue in the midfield. Ben Smith and Rieko Ioane are on the wings.

Flanker Matt Todd moves to the reserves. In other forward changes on the bench, Atu Moli comes in for Ofa Tuungafasi as prop cover, while Patrick Tuipulotu is lock cover.

In the backs, Aaron Smith starts at halfback, with TJ Perenara in the reserves, while Lienert-Brown will make his fourth start in the 12 jersey. Ngani Laumape will provide midfield cover from the bench.

All Blacks Head Coach Steve Hansen said: "Our preparation this week here in Perth has been very good. We can tell that it's 'Bledisloe One' week as there's a real sense of purpose in everything we do, and a real desire to do it well.

"With the extra time together, we're starting to see an improved clarity of roles out on the training park. We'll need to take the confidence that comes with that clarity into the Test on Saturday and deliver a game which has high energy, high skill and great decision-making.

"The Bledisloe Cup has always been incredibly important to this team and teams before us. It's those teams, ourselves, our country and our many fans that inspire and drive us to want to go out and 're-take' the trophy. We've never felt that it's about going out and 'retaining' the Cup because it's always been about earning the right to have it. This Saturday is no different. Both teams will be desperate and hungry for success."

Commenting on Australia, Hansen added: "Australia have started this Rugby Championship well. Their set piece has been very good and if we are to beat them, we'll need to take them on at set piece time and try and take away the quality of their possession."

There will be a minutes silence before the test to honour former All Blacks captain and coach Sir Brian Lochore, who died at the weekend and whose funeral is in Masterton today.

The matchday 23 is as follows (with Test caps in brackets):