The All Blacks begin their quest to make history when they kick off the Rugby Championship against Argentina in Buenos Aires on Sunday, two months out from the world cup. 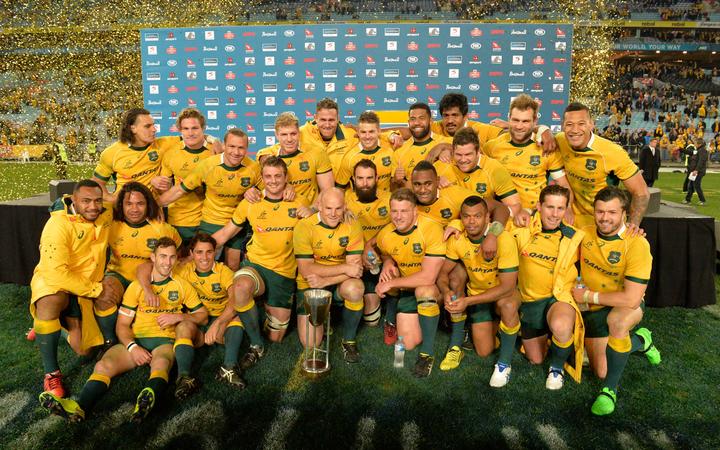 The Wallabies celebrating their Rugby Championship win in 2015. Photo: PHOTOSPORT

No team that has won the SANZAAR silverware - including when it was the Tri- Nations - has gone on to claim the World Cup in that same year.

The Wallabies notched rare titles in 2011 and 2015 with the All Blacks winning the Webb Ellis trophy in both those years and chasing a hatrick in 2019.

Australia kick off their campaign against the Springboks in Johannesburg with coach Michael Cheika making it clear that fine-tuning a World Cup squad is his priority.

The All Blacks are without their Crusaders contingent, who are being rested in the wake of their Super Rugby title win over the Jaguares.

"Winning it is not a good (World Cup) indicator historically," Hansen said.

"We've got to use that part of the series to make sure we've got the right 31 getting on the plane. So that's what we'll be doing."

Coach Rassie Erasmus wants to see a host of hopefuls put their hand up against the Wallabies and then see if a refreshed and more established group can match last year's upset win in New Zealand.

The steadiest set-up can be found in Argentina, where Mario Ledesma takes charge of a group dominated by Jaguares players coming off their Super Rugby heroics.

Most of the Jaguares beaten in the final by the Crusaders can expect a flight to Japan, alongside a sprinkling of top-flight European-based players.