Chasing 242 to win a match reduced to 49 overs a side by rain, New Zealand looked set to comfortably reach the target with Martin Guptill and Williamson at the crease.

But South Africa fast bowler Chris Morris picked up three wickets to leave New Zealand struggling at 137-5 before Williamson (106 not out) and Colin de Grandhomme (60) shared a 91-run partnership.

De Grandhomme fell before the end but Williamson reached his century with a six in the final over and guided New Zealand to their fourth win of the tournament with three balls to spare.

* Look at how the match unfolded with RNZ's live blog here

"It was nice to be there at the end," said Williamson who finished unbeaten on 106. "It's just trying to do the job as well as you can, I was fortunate I was able to do it today. There were a number of contributions that were so vital.

"It was one of those surfaces that provides a great spectacle. It could have gone either way." 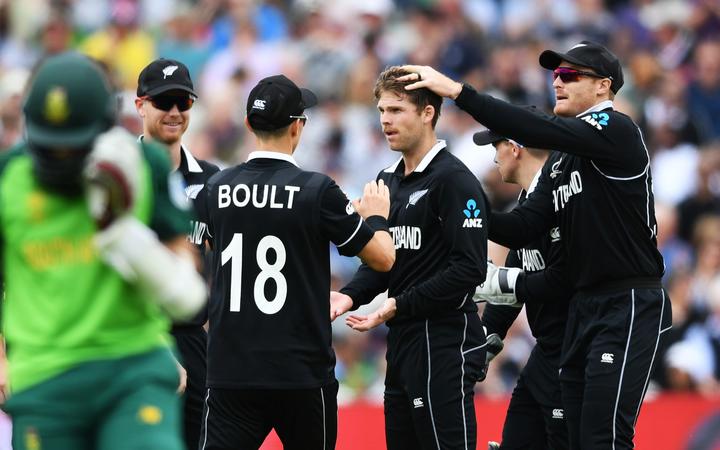 Earlier, South Africa's batsmen - apart from Hashim Amla and Rassie van der Dussen - failed to build on starts after being put into bat in the face of a disciplined bowling effort from the Kiwis.

Amla was bowled for 55 by Mitchell Santner, but Van der Dussen's unbeaten 67 off 64 balls gave the South Africans a respectable total to defend.

"We were aiming 260-270... we fell short," South Africa captain Faf du Plessis said. "We also had a lot of stop-start, stop-start innings but Kane batted through for the hundred and that was the game changer.

"We did everything we could, we threw ourselves around. The energy was unbelievable. Sure, there were some times that we dropped intensity. But Kane took it away from us."

The result leaves South Africa, who have won only one match, virtually out of the running for a semi-final spot while New Zealand keep their unbeaten run intact to move to the top of the standings, with four wins in five games.

Grant Elliott in #CWC15 or #KaneWilliamson in #CWC19- who did it better? pic.twitter.com/yhwXrNpOrs