After spending about 90 years tucked away in a box, the Invincibles tour jersey of Taranaki All Blacks legend Handley Brown is to go on display at the Puke Ariki museum in New Plymouth. 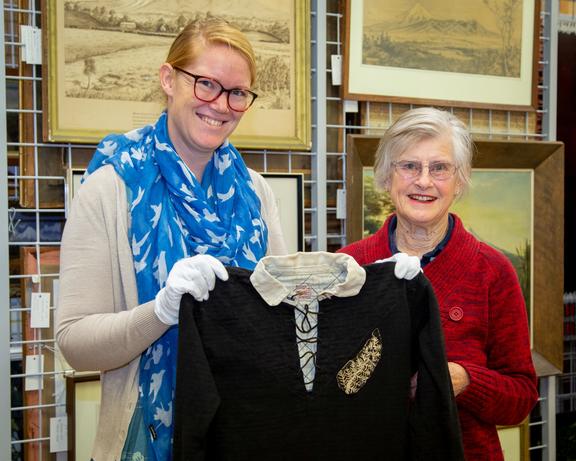 Brown played 20 times for the All Blacks between 1924 and 1926 and was part of the team who became known as "The Invincibles" after a dominating a 1924-1925 tour of the United Kingdom, France, Ireland and Canada, winning all 32 games.

Brown's daughter-in-law Vivienne Brown, the widow of All Black Ross Brown, and four generations of the famous Taranaki family gifted the jersey to the museum recently after talking to the Taranaki Research Centre about preserving it for future generations.

Mrs Brown said the jersey had spent the last 90 or so years, in first, a tin, and then a box with tissue paper.

"My family and I wanted the jersey to remain here in Taranaki. Handley was born here and it is only right that his jersey from the tour remains in the place he called home," Mrs Brown said.

"We know the staff at Puke Ariki will look after it and preserve it properly."

The jersey was now in the Puke Ariki collection and would go on display during the Rugby World Cup.

Mrs Brown said the jersey was in great condition for its age and had been only occasionally brought out of its box as she has kept it away from her many grand and great-grandchildren's fingers.

She was also keen to donate other All Blacks and Taranaki rugby memorabilia from Ross Brown's distinguished playing career.

"We are honoured that the Brown family has entrusted the care of the jersey to us," Ms Wells said.

"This is an item of national significance and is sure to appeal to all visitors but especially All Blacks and rugby fans.

"It's a special year for Puke Ariki as we celebrate 100 years of museums in Taranaki and we are looking forward to displaying the All Blacks jersey to complement the Whare Kahurangi exhibition."