Tiger Woods completed one of sport's great all-time comebacks to end an 11-year major title drought at the Masters on Sunday by claiming a fifth green jacket. 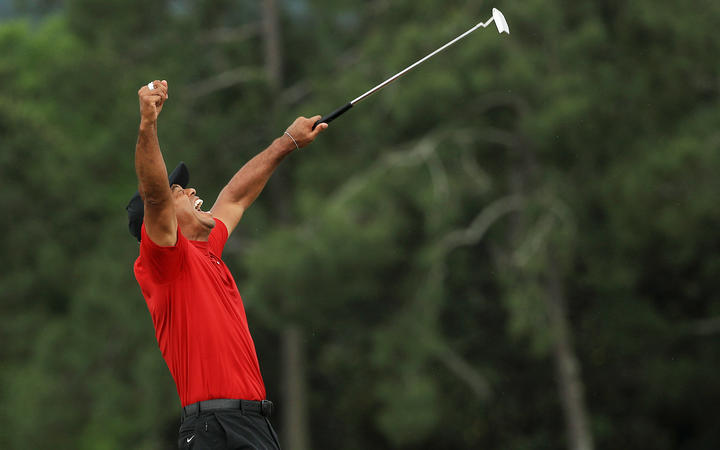 A gritty two-under 70 clinched a one-shot victory over Dustin Johnson, Brooks Keopka and Xander Schauffele earning the 43-year-old a 15th major title that many thought would never come and instantly renewed talk of a run at Jack Nicklaus's record of 18.

Not since the 2008 US Open had Woods hoisted a major trophy while the last of his four Augusta titles came in 2005, his fifth green jacket leaving him one short of another Nicklaus record.

Woods showed he still had the game to compete with the world's best when he triumphed in last year's Tour Championship, his first victory of any kind since 2013.

This is the first time Woods has ever come from behind on the final day to win a major championship, leaving him three behind Jack Nicklaus' record of 18 major titles. Overnight leader Francesco Molinari title charge collapsed with two double bogeys.

When his final putt disappeared into the cup, Woods delivered one of his trademark fist pumps then raised both arms in the air screaming in absolute delight as the crowd chanted, "Tiger, Tiger, Tiger".

He then quickly spotted his family and raced over to hug his children before making his way to the scorers room while being congratulated by his fellow golfers who lined the way.

"I was just trying to plod my way along the golf course all day," said Woods. "When I tapped the putt in, I don't know what I did but I know I screamed.

"To have my kids there, it's come full circle. My dad was here in 97 (when he won his first Masters) and now I'm the dad with two kids there."

I am literally in tears watching @TigerWoods this is Greatness like no other. Knowing all you have been through physically to come back and do what you just did today? Wow Congrats a million times! I am so inspired thank you buddy.

Congrats Tiger! What a performance..

Basketball great Magic Johnson posted: "The roar of the Tiger is back!"

A big BIG congratulations to @TigerWoods for winning the Masters!! The roar of the Tiger is back!

Congratulations, Tiger! To come back and win the Masters after all the highs and lows is a testament to excellence, grit, and determination.

Written off as too old and too beaten up from four back surgeries and multiple knee operations, Woods underwent a back fusion in 2017 and slowly returned to form.

He ended last season by winning the Tour Championship and showed signs of a breakthrough at the majors by being a title contender at last year's British Open, where he led in the final round, and PGA Championship, where he finished runner-up.

All those moments built to Sunday, when Woods was once again his old familiar dominating self.

All eyes were on overnight leader Francesco Molinari, who led by two shots, Woods and the weather when play began as the race for the green jacket turned into a final sprint with the forecast predicting rain and thunderstorms.

In a desperate attempt to get the season's first major across the finish line before the storm hit, officials pushed up start times and sent golfers off in threesomes from both the first and 10th tees.

Paired together in the final round of last year's British Open, won by the Italian at Carnoustie, Molinari and Woods found themselves in the last group again battling for a major title.

At Carnoustie it was Woods who stumbled on the back nine while leading. But on Sunday it was Molinari who slipped up, with the 36-year-old from Turin finding the water at the 12th and 15th. The two double bogeys ended his Green Jacket bid.

Molinari had played near flawless golf through the first three rounds, carding a single bogey, but on Sunday a bogey along with the two doubles during a miserable final round of two-over 74 left him two back of the winner.