Tiger Woods has shot his best score at Augusta National since 2011, a five-under-par 67 that lifted him into a share of second at the Masters, two shots behind the third round leader Francesco Molinari. 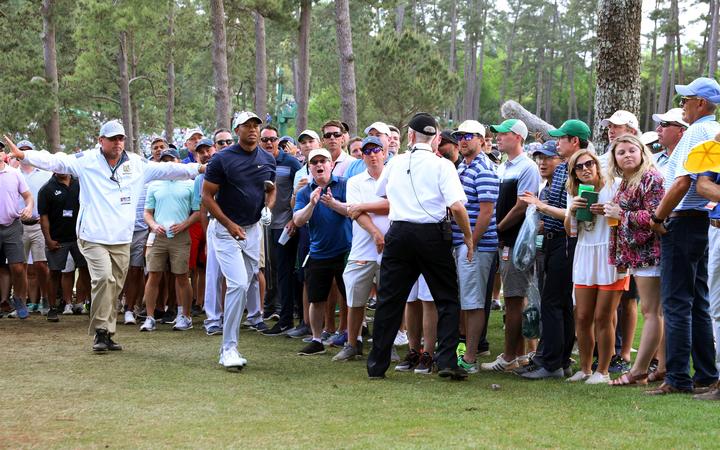 Woods, who last slipped on the Green Jacket in 2005, will start the final round with Molinari and Tony Finau.

Italian Molinari, who leads the way on 13-under 203, is unlikely to be intimidated by Woods, after staring down and overtaking the American en route to winning last year's British Open at Carnoustie, where they were paired in the final round.

A victory tomorrow would be Woods' fifth at Augusta National, leaving him second behind six-times champion Jack Nicklaus, but to do so he will have to pull off something he has never done before -- come from behind in the final round to win a major.

All 14 of his major wins have come after Woods held the 54-hole lead.

The 43-year-old said he would be feeling the pressure tomorrow. But that is nothing new.

The early holes offered little inkling of the fireworks ahead as Woods got off to a pedestrian start.

Four pars followed by a bogey at the difficult newly-lengthened fifth left him languishing at five-under par.

While other players were taking advantage of benign conditions, with soft greens allowing them to fire fearlessly at the pin, Woods's round seemed to be passing him by.

That would change at the sixth, however, as Woods reeled off three straight birdies.

"I just let the round build," he said.

He had some luck mid-round, twice seeing wayward drives ending up with a clear path to the green, from where he had no trouble threading recovery shots between the Georgia pines to save par.

But his biggest piece of luck came at the par-five 13th, where he hooked his drive so far left that the ball seemed more likely to end up in adjacent Augusta Country Club than stay in Augusta National.

Somehow the ball ricocheted back into play, just off the fairway.

He took advantage of the break, punching his second shot to wedge range and then skipping his next up to set up a birdie.

Further birdies followed at the par-five 15th and par-three 16th, and the stage was set for tonight.

"I'll get the mind and body ready for tomorrow and get after it a little bit earlier than we're used to."