Opinion - Yeah, OK, that headline may raise a few smirks, or a few eye-rolls, because it's basically the same thing that's been printed around about this time for the last two and a half decades. 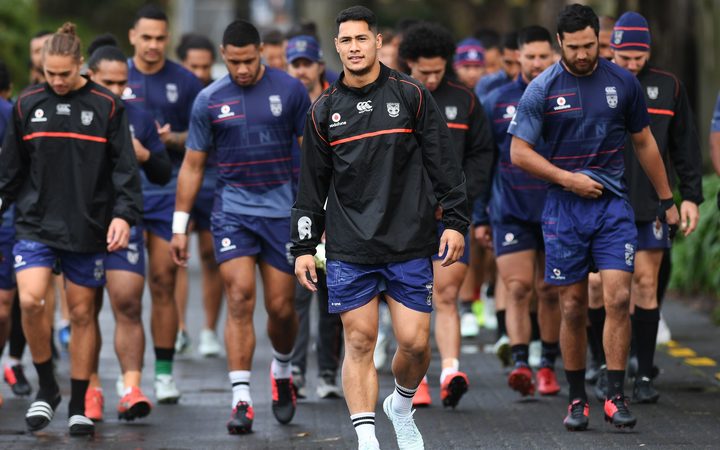 But the fact still remains that the Warriors occupy most of the rich real estate that is rugby league in New Zealand for an overwhelming large part of the year, and they are coming into 2019 off the back of their most successful season in years.

So here's what will, may and hopefully, be happening at Mt Smart for the duration of the long NRL season.

Back to the future

The Warriors will run out in 1995-themed heritage jerseys, paying tribute to the iconic blue, green and red numbers that first emerged from the tunnel on the north-east corner of Mt Smart for their first game against the Brisbane Broncos.

No word yet on whether they'll be restocking the stadium bars with DB Bitter, though, which was one of the team's sponsor in '95.

This time last year, imagining the Warriors without Shaun Johnson would have seemed crazy.

Actually, at the end of the season it was too, given that he'd just put them into their first finals series in seven seasons.

But, he's gone - the reasons for which are far too detailed and murky to get into here.

Not only that, but his backup Mason Lino has departed as well. It's a bold new direction for a club that has also lost Simon Mannering in far less controversial circumstances (he retired).

Now the Warriors are more or less auditioning the part that Johnson has vacated until they can find someone to fill it permanently, first up it's Adam Keighran in the hot seat for the opener against the Bulldogs on Saturday.

However, while this may look like this is the old stop-gap solution of bringing in an Australian import to seemingly solidify one side of the field (admittedly it did work with James Maloney and Blake Green), there is some exciting young talent pushing Keighran inside the squad.

Chanel Harris-Tavita is widely regarded to have the goods to go on to a long NRL career, and had an outstanding season with the reserve grade side last year.

He is absolutely deadly off the kicking tee as well, which is something that will be essential if they want to repeat their success of last year.

This kid is why the Warriors we’re willing to let Mason Lino head to the Knights.

Exited to see him possibly get a run with the first-grade team in 2019. pic.twitter.com/E5fJH7thRV

As per usual with the Australian media, half of the major pundits have already written the Warriors off, with a couple even going so far as to predicting them to take the wooden spoon.

The same thing happened last year, and after the Warriors' 7-1 start to the season, plenty of those same pundits were asking for a napkin while they ate their words.

If the halves the Warriors have on the books don't work out, then they can go to the market and try and find someone else.

Johnson's departure has left a lot of free cap room available, but then the Warriors face the age-old problem of trying to convince a high profile player to move to Auckland and work in Penrose.

So it may be more of a story than anything else, but rumours are always fun.

A good start to the season

You just never know with the Warriors, so this may well be playing with fire to suggest they can match their high-flying first seven rounds last year.

But they do have a relatively soft draw first up - at home to a new-look Bulldogs, away to the Tigers and Sea Eagles, the Titans at home, a tough match away at the Rabbitohs, then a visit from the Jonathan Thurston-less Cowboys.

After that, it's the traditional Anzac Day clash with the Storm - which, for the last two seasons, has been just as much of a catastrophe for the Warriors as it was for the blokes landing at Gallipoli.