Adam Keighran is set for an extended run in the Warriors halves after winning an intense off-season duel to replace Shaun Johnson.

Coach Stephen Kearney said there was little between Keighran and Junior Kiwis teenager Chanel Harris-Tavita but he plumped for the young Australian to start Saturday's NRL opener against the Canterbury Bulldogs in Auckland. 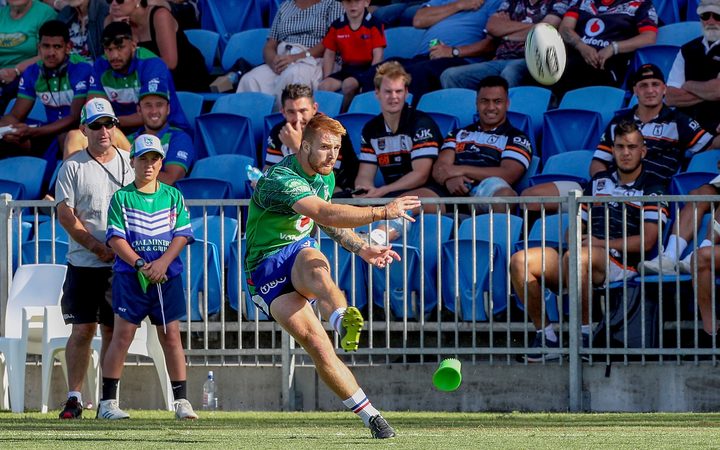 Keighran will have the additional pressure of goalkicking in his first grade debut but Kearney believes the 21-year-old has the maturity to cope.

He wants to give the former Penrith lower grader every chance to forge a combination with veteran halfback Blake Green, suggesting Harris-Tavita won't get a look-in for at least the first month of the campaign.

"I don't think that gives anyone a bit of stability and a bit of continuity about their game, (although) they've both worked really hard and they're not too far apart."

His stocks soared when long-time playmaker Johnson exited the Warriors later that month.

Even at that point, Keighran seemed a long shot to debut, with Kearney unimpressed with his fitness.

When the club decided not to chase a high-profile replacement, Keighran and Tavita-Harris underwent a crash course in first grade wisdom from Green and assistant coach and halfback great Stacey Jones.

"They're young guys who understand the opportunity that's ahead of them," Kearney said.

"Their attitudes towards improving themselves and learning off some pretty experienced guys - that's what's impressed me most.

"Then it was a matter of this week, who's going to best suit the team."

He replaces lock Isaiah Papali'i, who has been stood down as punishment for an off season drink driving offence.

Prop Leeson Ah Mau is on the bench in his return to the Warriors, who he played for twice in 2009. The 29-year-old represented the Cowboys and Dragons in 177 games before signing a three-year deal.

The only notable injury absentee is hooker Issac Luke (hamstring), who Kearney predicts will be available in round two or three.

Nathaniel Roache starts at hooker, having missed 2018 following back surgery.