There are times when you wonder if sporting codes actually care about women. 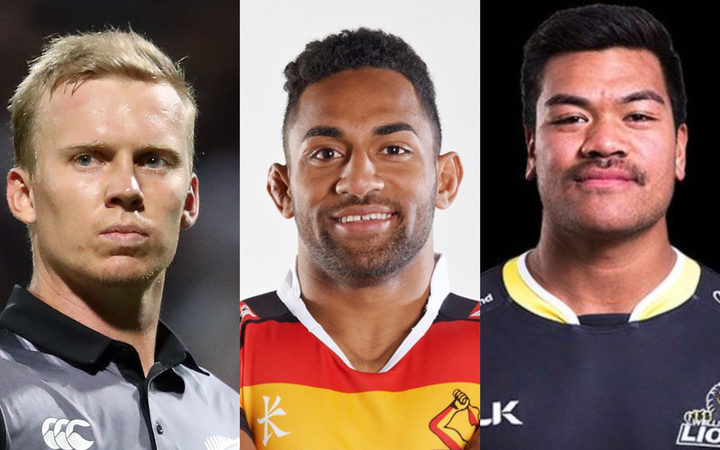 They're quick to say they do - heck, the NRL even has a 'Women in League' round - yet their latest offseason has been littered with allegations of assaults by players upon women.

Closer to home, New Zealand Rugby (NZR) go and do a just thing in naming Kendra Cocksedge its Kelvin R Tremain Memorial player of the year, only that had been preceded by Sevu Reece getting contracted by the Crusaders.

Reece, as many will remember, signed a two-year deal to play for Connacht in Ireland but the club tore that up once the Waikato wing appeared in court on a domestic violence charge. The Crusaders and NZR were quick to throw him a lifeline, though.

Now we have Wellington outside back Losi Filipo named in a national sevens development squad. Filipo was convicted of assault in 2016, after an incident in which two women were among the victims.

Then we have New Zealand Cricket and their attempts to give the White Ferns women's team some prominence by scheduling them to play curtain-raisers during the Black Caps' Twenty20 series against India. Again, a noble initiative, but one made rather worthless by behaviour that showed no respect towards women at all.

Fast bowler Scott Kuggeleijn was in the New Zealand T20 side, having been found not guilty of rape in 2017, though he admitted in court that the woman he had sex with said no at least twice to his advances.

That prompted some fans, at matches in Wellington and Auckland, to unfurl banners in the ground relating to consent. Those banners were later confiscated by security staff.

Never mind the performances of the White Ferns, or even the Black Caps for that matter, the thing many people took away from those games was that female fans had potentially been intimidated into removing their slogans.

But when athletes such as Reece and Kuggeleijn and Filipo are contracted to teams of prominence, it's hard not to feel their past actions are being minimised or even forgiven.

The counter is that the trio have all fronted the judicial system and should now be free to conduct their careers without stigma, accusations or attempts to relitigate their particular cases.

Maybe so. But surely people are also able to voice disquiet that these men are playing?

Let's isolate Filipo for a minute. His crime is documented, as is the sentence of nine months' supervision he was eventually given.

The thing that stands out about his case is the disproportionate publicity it provoked. It came at a time when people were angry about rugby.

The Chiefs Super Rugby team had been involved in an incident with a stripper and, New Zealand being a small place, many in the public felt they knew what had gone on and that NZR hadn't punished the players accordingly.

Filipo's situation came to light and was seized upon by those who wanted rugby to pay for its perceived sins.

You can argue that, almost three years on, Filipo himself is still paying. His selection in the New Zealand Sevens development squad was greeted by headlines describing him as a "disgraced'' rugby player.

That was highlighted by Hurricanes and All Blacks back Nehe Milner-Skudder, who said on Twitter that he couldn't understand why such a negative spin has been put on Filipo's worthy accomplishment. That's where these codes need to help themselves.

Why put such a negative spin on such a great accomplishment???
As the bro @ardiesavea put it, "Start writing some positive and uplifting stuff and bring people together instead of bringing them down" @NZStuff @NZStuffSport

Rightly or wrongly, it's going to take a lot for athletes such as Kuggeleijn and Filipo to outrun their pasts and, in the meantime, NZC and NZR are doing their own reputations harm. And for what? With the greatest respect, Kuggeleijn, Reece and Filipo aren't future greats. They're okay players, but surely not ones to risk the standing of your organisation on.

This at a time when codes can't just be seen to do the right thing by their female athletes, staff and supporters, they actually have to do it.

If that's not motivation enough, where do they think the next generation of players are coming from? You disenfranchise mothers at your peril.

There will be those who defend these men and argue they deserve a second chance. Again that may be so and, on an individual level, you feel for them to a degree.

But this isn't about one or two blokes anymore. It's about sports finally giving women the respect they deserve.