The West Indies bowler Shannon Gabriel claims he asked England's Joe Root if he "liked boys" during the third Test but has apologised for his words.

The 30-year-old was charged for the comments he made to skipper Root, who replied "Don't use it as an insult. There's nothing wrong with being gay."

The incident in St Lucia resulted in a four-match ODI ban for Gabriel, 30.

"I know now that it was offensive and for that I am deeply sorry," Gabriel said in a statement. 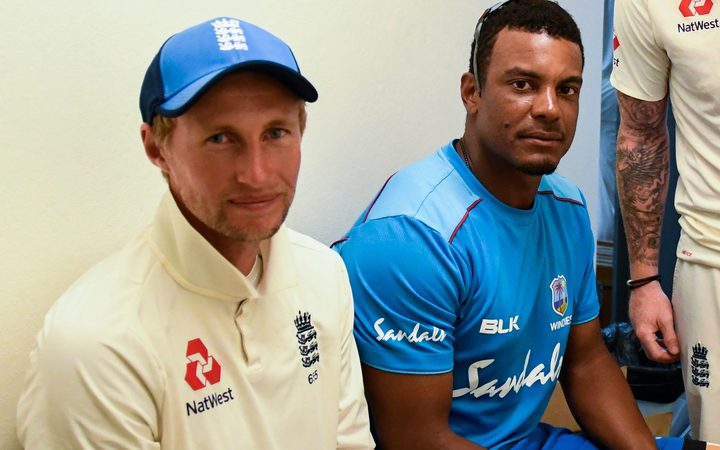 Joe Root of England in the dressing room with Shannon Gabriel of West Indies at the end of day 4 of the 3rd and final Test between West Indies and England. Photo: Photosport

"To my team-mates and members of the England team, especially their captain Joe Root, I extend an unreserved apology for a comment which in the context of on-the-field rivalry, I assumed was inoffensive sporting banter."

Gabriel said of an exchange that occurred on the third day of the Test that it had come "during a tense moment on the field".

"The pressure was on and England's captain Joe Root was looking at me intensely as I prepared to bowl, which may have been the usual psychological strategy with which all Test cricketers are familiar," he said.

"I recognise now that I was attempting to break through my own tension when I said to Joe Root: 'Why are you smiling? Do you like boys?'

"His response, which was picked up by the microphone was: 'Don't use it as an insult. There's nothing wrong with being gay'.

"I then responded: 'I have no issues with that, but you should stop smiling at me'."

Gabriel was charged with personal abuse of a player and by accepting the charge, Gabriel was fined 75% of his match fee and picked up three demerit points, taking his overall total to eight in a two-year period, which triggered the ban.

England won the Test by 232 runs, although they had already lost the series having been beaten in the first two Tests.

A five-match ODI series between the sides starts on February 20 in Barbados.