Ladder leaders Melbourne United have maintained their bulldozing form in the lead-up to the NBL finals with a 107-87 rout of the New Zealand Breakers in Auckland. 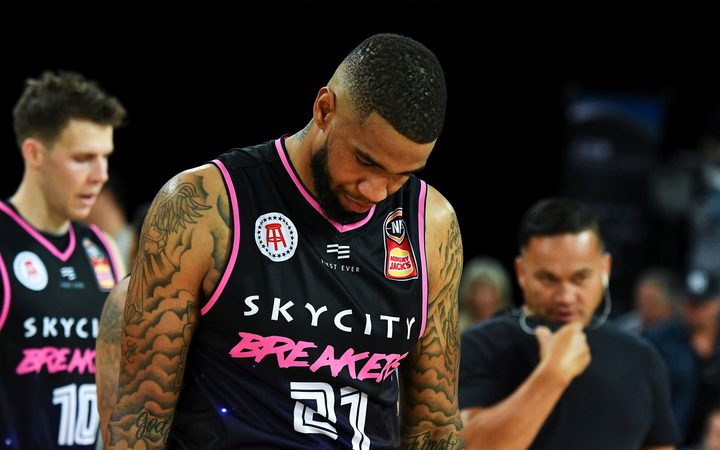 The defending champions dominated all facets, with some sublime shooting from Chris Goulding and David Barlow sending the Breakers to the verge of elimination from the playoff race.

While the Breakers' run of two wins was snapped, leaving them with a 10-13 record, Melbourne (15-8) made it three in a row to extend their ladder lead.

All three wins have been lopsided, having crushed Illawarra last week by 24 points, followed by a 23-point dissection of Adelaide on Monday on the road.

Coach Dean Vickerman has his team fizzing, including Goulding in his new role off the bench. The Boomers' guard shot 24 points, including nine-of-13 from the field. He also managed five assists.

Barlow fell one short of his season high with 23 points, drilling five of his seven three-point attempts.

Barlow said the win could be traced back to astute preparation by Vickerman and assistant coach Paul Henare, who had both been head coach of the Breakers.

They were able to suck the speed out of the Breakers' offence and reduce the effectiveness of star centre Shawn Long.

In attack, the open jumper was regularly found through slick passing.

"Our scouting was great, I felt the coaches did a great job - put us in a good position from the start," Barlow said.

"It's such a luxury as a player to have that - to go into a game and it feels so comfortable in what the plan is."

Centre Josh Boone maintained his influential form with 14 points. He and DJ Kennedy both pulled down 11 rebounds, helping his team to dominate under the boards.

The seventh-placed Breakers paid for another ragged defensive outing, conceding 59 points in the first half, including 17 unanswered points in the second quarter to silence the crowd at Spark Arena.

"I don't know why we came out like that. We knew the season's on the line but we weren't desperate enough, which is disappointing.

"But we have to pick our heads up and stay as a team."

Their outside shooting was poor, not helped by Tai Wesley's one-from-seven from the three-point range on a forgettable night for last season's title-winning Melbourne forward.