Opinion - Remember that time a guy who wouldn't look out of place riding a fixie push bike through Grey Lynn scored four tries against the All Blacks? 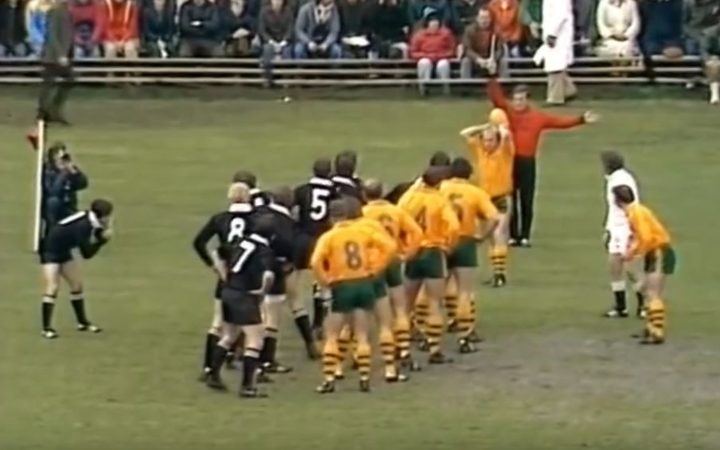 Wallabies and All Blacks in 1978. Photo: Screengrab from YouTube - The Bledisloe. Two Nations - One Cup

These days the thought of the All Blacks losing at Eden Park is laughable. They haven't been beaten there since 1994, and haven't lost to Australia there since 1986. Go back further to 1978 and it was a different story though. That was a strange year for the All Blacks.

It is the same year they famously won their first Grand Slam, but also lost to Munster.

However, while you'll never hear the end of it should you come within earshot of an Irish rugby fan, the All Blacks' other big loss that year remains one of the heaviest ever on New Zealand soil.

The All Blacks had already won the first two tests of the series in Wellington and Christchurch, and would've felt pretty confident striding onto Eden Park. Even though the 70's weren't the best period for the All Blacks, with two series defeats to the Springboks and one to the British Lions, they had not lost a series to the Wallabies in 29 years.

The 78 Wallabies side didn't exactly have the All Blacks quaking in their boots, either. They'd dropped games to Southland, Otago, Manawatu and North Auckland on their tour, and their coach Daryl Harbrecht had suffered a serious heart attack in the week leading up to the last test. In those days the Wallabies were seen as such easy-beats that the All Blacks hadn't even bothered bringing the Bledisloe Cup home with them.

Which is why the eventual 30-16 result that afternoon in September 1978 sticks out like a sore thumb. Indeed, the way in which it happened was even more odd.

Greg Cornelsen was a number eight from Queensland who had never scored a try or tasted victory over the All Blacks. He was a tall, lean specimen with a mop of curly hair and a long, shaggy beard. His eight year test career ended up with him being inducted into the Australian Rugby Hall of Fame, however it was this game that inevitably gets brought up whenever Cornelsen's name is mentioned - ever.

Cornelsen was the dictionary definition of the right man in the right place at the right time. Unfortunately for the All Blacks, he managed to be it four times in 80 minutes.

With all due respect, none of his quartet of then-four pointers were classics of the aesthetic variety. His first was from a shocking lineout throw that eventually ricocheted off one of the posts into his hands. The next was a textbook pick and go. The third was after he dived on a blatant knock forward. The last one was off a deflected pass that he dived on in the All Black in goal.

Cornelsen travelled, at most, maybe two and a half metres with ball in hand for his four tries. Even more unbelievably, his fourth made the score 30-6 in favour of the Wallabies.

That would've easily been the biggest hiding the All Blacks have ever suffered, but a couple of late tries to Stu Wilson and John Ashworth made the scoreline a little more respectable. Afterwards, Cornelsen stripped off and swapped jerseys, pulling the All Blacks' one on inside-out as he left Eden Park.

Cornelsen ended up playing 25 tests for the Wallabies, but the four tries he got that day in 1978 were the only ones he ever scored. The Aussies went on to beat the All Blacks in 1979, their first series win in 30 years. Someone found the Bledisloe Cup in an storage room in the Sydney Cricket Ground so that the Wallabies could take it on a victory lap.

It's a pretty safe bet that it was the first time any of the All Blacks playing that day had ever seen it. Fast forward 40 years and the gap between wins for the Aussies is inching closer to what it was back in those days, but at least the All Blacks hold the Bledisloe Cup up for everyone to look at now.

Unless the Wallabies can harness the spirit of Greg Cornelsen on Saturday night, that's what will happen at fulltime this Saturday, too.