Two late tries by the All Blacks have denied Argentina their first ever win over the All Blacks as they were beaten 39-22 in their Rugby Championship game at Yarrow Stadium in New Plymouth. 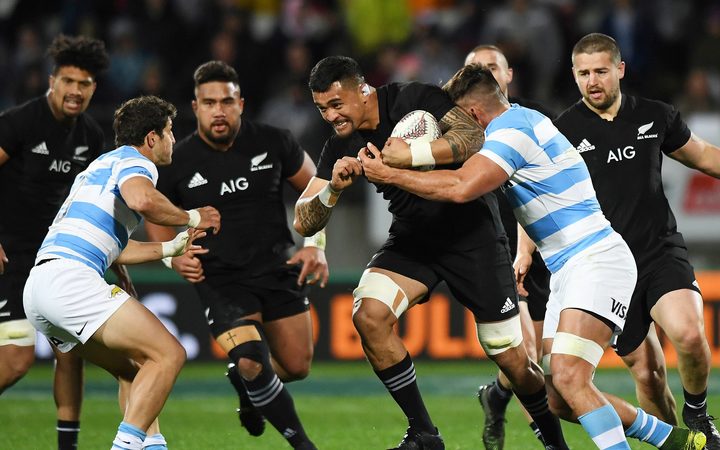 Vaea Fifita on the charge against Argentina. Photo: AFP

The final scoreline masked a brave Puma effort as they led for long periods before sucumbing to a late All Black charge.

The All Blacks opened confidently with three unconverted tries but two penalties, a drop goal and a try right on half time by first five Nicolas Sanchez saw the Pumas go into the break with a 16-15 lead.

Strong running and crunching defence put the Pumas on the front foot for much of the middle section of the game.

The sinbinning of hometown hero Beauden Barrett soon after the break for a professional foul enabled the Pumas to go out to a 22-15 lead.

But in the defining moment of the game, powerful new looseforward Vaea Fifita, nicknamed "the Beast" earlier this week by coach Steve Hansen, stormed down the field and over the line to lock up the game at 22- all.

Tries to Damian McKenzie and Beauden Barrett finally saw the All Blacks pull ahead in the last quarter of an hour to seal the game.

The result puts the All Blacks at the top of the Rugby Championship table after two earlier wins over Australia.

South Africa, who are also unbeaten after two matches against Argentina, have just kicked off their match against the Wallabies in Perth.